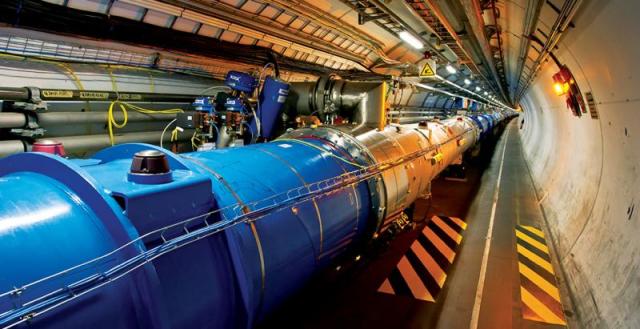 CERN’s Large Hadron Collider, the most powerful particle collider in the world, made headlines in the last few years when it confirmed the existence of the Higgs boson particle, which was predicted by the Standard Model of particle physics. Now, it might have found a particle that defies that model entirely.

That’s not incredibly surprising, given that the Standard Model of how subatomic particles interact, while generally reliable, can’t explain everything in the Universe on its own. On the other hand, it’s not every day a discovery like this comes along, and the team at CERN isn’t even ready to call it a “discovery” just yet. As Mariusz Witek, lead researcher from the Institute of Nuclear Physics of the Polish Academy of Sciences said in a news release:

Up to now all measurements match the predictions of the standard model. However, we know that the standard model cannot explain all the features of the Universe. It doesn’t predict the masses of particles or tell us why fermions are organised in three families. How did the dominance of matter over antimatter in the universe come about? What is dark matter? Those questions remain unanswered.

The research at the LHC had already recorded B meson particles—which are predicted by the Standard Model—decaying in 2011 and 2012. However, those particles should eject the product of their decay off at specific angles according to the Standard Model, and a team of Polish researchers used developed a more sensitive measurement to show that the decay wasn’t following predictions.

That means there must be something else at work that isn’t predicted by the Standard Model, which they theorize to be an “intermediate Z-prime boson.” On the other hand, though there’s a paper on the data, the researchers aren’t quite ready to call this a discovery yet. They also believe there could be unforeseen factors affecting the decay that the Standard Model should have been able to predict.

Either way, they’ll need more data to say for sure, and the LHC is back at it, smashing particles together with higher energy than ever before. This is fairly exciting for CERN as the worst case scenario (well, other than still not having conclusive data) is adding new information to the Standard Model, and the best case is defying it entirely and adding something brand new to our understanding of the Universe’s most basic functions.

(via Science Alert, image via CERN)