Guy Ritchie’s Aladdin Film Re-Writes Original, Creates a White Character Where There Was None Before

ok but why tho 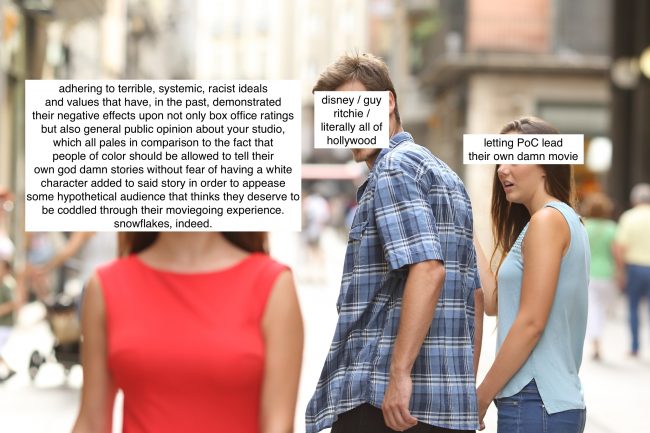 The move has puzzled many people (us included), as it very much seems like Disney just couldn’t commit to creating a movie without featuring at least one white character or actor. Previously, the film came under fire after a Hollywood Reporter article said that the film was having a tough time getting underway as it “struggled to find stars” who could take on the lead role. It went on to suggest that the struggle could be stemming from the fact that Disney wanted to bring in “a Middle-Eastern or Indian actor” to play Aladdin.

This, of course, boggled our minds, as we found it straight up silly that Ritchie and Disney were stuck on this part in particular, as by then (July), they had sat through only 2,000 auditions. TMS’ Marykate pointed out that the Harry Potter folks sat through 40,000 auditions in order to land on Daniel Radcliffe. Moreover, it’s shortsighted (nay, ignorant?) for them to say that it’s hard to find a Middle-Eastern or Indian actor who can act and sing—hello, yes, Bollywood is calling, and they want to know what’s good.

We’re not sure who fought to have this character included or exactly why, as the initial article doesn’t exactly say. But it doesn’t really matter whether it was Disney, Ritchie, or some uptight studio exec who won’t acknowledge their own bias. What matters is that Aladdin was, before this news broke, going to be a film primarily starring people of color. It was going to be a film that would help the studio make a step in the right direction, and while the vast majority of the leading cast will still be sticking around, it’s disappointing to think that for whatever reason, they just couldn’t be trusted to lead a movie without a white character present.

This isn’t a sleight against Magnussen’s skills or anything—I loved his turn as Rapunzel’s prince in Into the Woods—but again, it’s just frustrating to think that the studio or the director or some combination of whoever’s working on this film couldn’t even let one movie go by without feeling compelled to re-write an old folk-tale-turned-animated-film. But then again, I guess writing yourself into someone else’s history is the way white colonial imperialists do things. Maybe I shouldn’t be so surprised.

Anyway, I can’t wait to hear all the wonderful criticisms about this new character from the brigading fans who always clamor for historical accuracy and demand that studios remain faithful to the source material. You’re all going to come out swinging for Aladdin and its cast full of people of color, right?