Black Women Are Speaking Out Against Guerrilla's Erasure | The Mary Sue 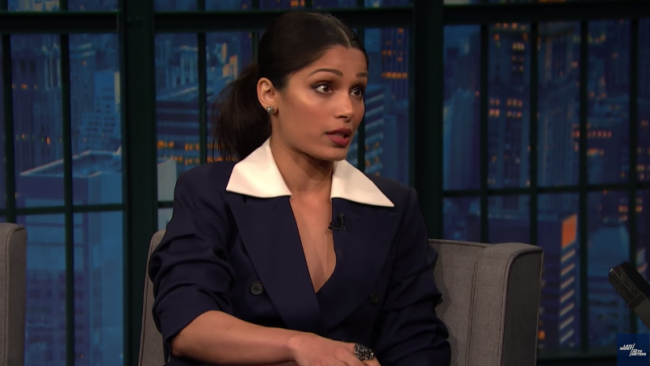 When Sky Atlantic’s upcoming drama about the Black Power movement in 70s London Guerrilla was first announced, it had many promising elements. Not only was this history one that deserved more attention, it included Idris Elba and 12 Years a Slave‘s writer John Ridley as director—though the lack of a black female lead raised some skepticism. However, a recent screening revealed a gigantic, glaring issue in the series that also illuminated the tendency within society to take the legitimate issues facing black women and reduce them to stereotypes.

Writer Rebecca Theodore hosted a Periscope where she gave a run-down of what had occurred. She states that at a special screening and live panel last Friday, journalists and viewers expressed discontent at the show’s erasure of black women in this history. The show’s main characters are a couple played by Frieda Pinto and Babou Ceesay, and while there’s nothing wrong with having a South Asian actress in this series viewers were troubled by how they saw only one black female character.

Furthermore, this character is revealed to be an informant sleeping with the enemy. This is, 0f course, not a good look for a historical series aiming to write about a movement that real women were an essential part of. While this was only the first episode, journalists were understandably concerned about how the show would handle representation in future episodes.

Shadow and Act has a detailed summary from Screen Daily on their site. Ridley was asked about the show’s representation of black women, and the show’s decision to center the story around a South Asian woman and black man:

My parents were a part of that movement [black power]. I want to understand why you decided [to make] an Asian woman the main protagonist … I understand the contribution of Asians to this, but having an Asian protagonist making all the big decisions … does that get explained in subsequent episodes? We can’t ignore that.

Ridley responded with an answer that was pretty unsatisfactory, so he was asked the question again:

I’m not sure you quite answered the question—why are there no black women at the forefront of the struggle? That doesn’t necessarily accurately reflect what happened in the 70s in the UK.

The director responded that he wanted to reflect his own interracial relationship in the mini-series. Ridley, during the Q&A, tears up talking about his wife, which then leads Pinto to begin crying as well:

I said previously, I think the characters in this story are complicated across the board, so the concept that any one person is somehow better, or more elevated, or more appropriate than any other individual, I’m sorry, I don’t accept that.

I don’t want to make this overly personal, but part of why I chose to have a mixed race couple at the centre of this is that I’m in a mixed race relationship. The things that are being said here, and how we are often received, is very equivalent to what’s going on right now [in the wider world]. My wife is a fighter, my wife is an activist, and yet because our races our different there are a lot of things we have to still put up with.

The troubling response to this panel, Theodore and other black women have pointed out, is that news sites immediately started painting Pinto as the victim of aggressive “activists,” some even branding them “Black Lives Matter activists.” Reporter Dominique Hines, one of the journalists who questioned Ridley, points out that this is a pretty racist assumption, as asking creators valid questions about their work is her just doing her job.

That’s what good journalism does—asks difficult questions that might start uncomfortable, but necessary conversations. Still, that didn’t stop outlets from twisting a legitimate question about how Guerrilla chose to portray black women into an “angry black women” stereotype. While (from what I hear) no one was trying to fire Pinto or erase South Asian contributions to the movement, the issue of erasure was glossed over in favor of a narrative that made black women the aggressors.

Here’s just a few of those headlines: 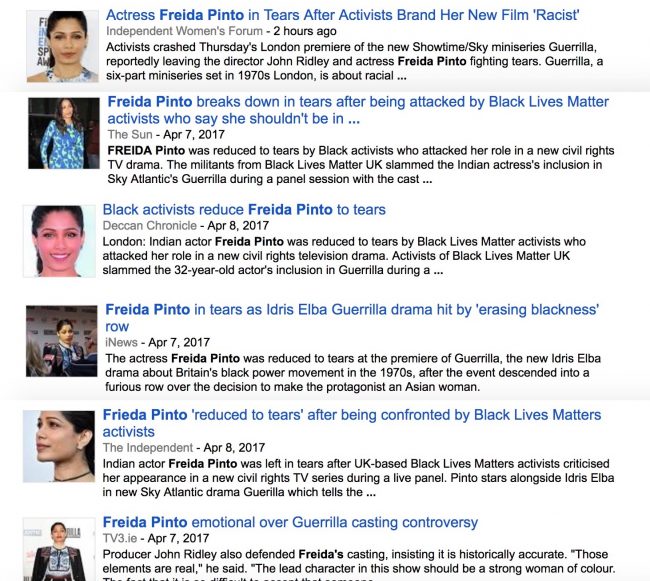 Theodore continues her Periscope (seriously, go watch it) by talking about the movement in the U.K. and emphasizing how important it is that black women have access to social media. I wouldn’t have known about this event if it weren’t for Twitter, so I’m very thankful for her and other Black-British writers who have been speaking out about this. Ridley’s deflection, she says, shut down a conversation that needs to happen.

@WailQ Please also use this as an opportunity to find out more and share the histories of the women in the movement – know their names! pic.twitter.com/z5MvgvsL8E

Ridley has gone on to call the event a “conversation-starter,” which is a tough categorization when he still hasn’t really answered the question. “It’s not about agreement, it’s about allowing people in some way to have some thing that they can talk about, whether they agree or disagree,” he told The Hollywood Reporter.

While it might be hard to defend your show when this question came from one episode, it’s evident that the frustration here isn’t just about Guerrilla, but a wider issue in which black women are silenced or dismissed when they bring up their own representation. If Ridley wants his show to start conversations, he should engage in them himself and listen to women who don’t want to be erased or misrepresented.

(via Shadow and Act)