Grumpy Cat Gets a Movie Deal, Presumably Feels Grumpy About It

I starred in a feature-length production once. It was awful. 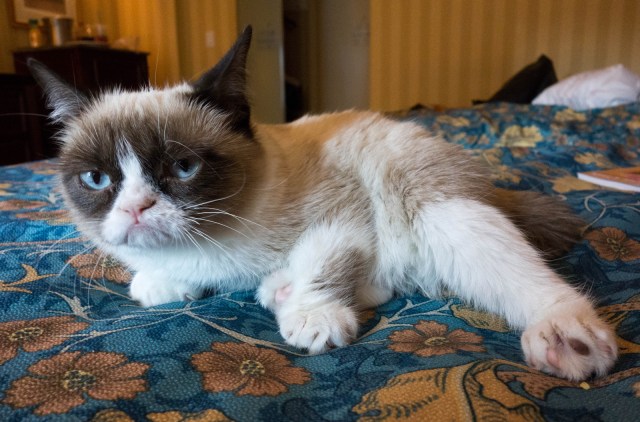 Good news for people who like movies starring adorable animals: Broken Road Productions, the film studio that brought you such classic titles as Jack and Jill and The Sorcerer’s Apprentice, has negotiated a deal for a family film starring the Internet’s favorite curmudgeon, Grumpy Cat. Bad news: It will probably not be 90 minutes of following her while she crawls around her Arizona home, which is what the Internet really wants.

Grumpy Cat, whose given name is Tardar Sauce, has received many accolades since her introduction to the World via Reddit last year. Mashable called her the most important internet Meme of 2012, and MSNBC gave her the title of Most Influential Cat of 2012 (wow, 24-hour news stations sure have a lot of time to fill, huh?). This year, she was even crowned Queen of Social at SXSW. Now, according to talent agent Ben Lashes, she’s been tapped to star in her very own feature-length production.

On the one hand, it’s very difficult for Internet memes, blogs, and Twitter accounts to successfully engage an audience in other forms of visual media. Remember the CBS program S*** My Dad Says? Memes, by their very nature, aren’t particularly interested in a long-term narrative structure — they’re short bites of entertainment meant to grab attention quickly and lose it immediately afterwards. There’s already a lot of speculation that this movie will derive much of its inspiration from the Garfield franchise as well. I hope we don’t have to explain to you why that might be a problem.

On the other hand, it’s Grumpy Cat! I, personally, will never get tired of Grumpy Cat. Every time I see her scrunched up face and tiny legs, I become that much more content with my existence. It’s almost as if she is grumpy so that I may be happy, like a little furry Jesus dying of boredom for my Internet sins. I even sent out Grumpy Cat-themed Christmas cards this year. If the movie were just 90 minutes of following her around, I would camp out for tickets.

Unfortunately, they’re looking to “build a big family comedy around this character,” according to producer Todd Garner, so odds are this movie is going to try to have a plot and characters and lame stuff like that. Grumpycat will probably even talk, too. If that’s the case, then they should get the adorable voice actress that Tumblr Storyboard used in the video below. That might make the inevitably hacky jokes just a little more bearable.

(via Mashable, image via Scott Beale)