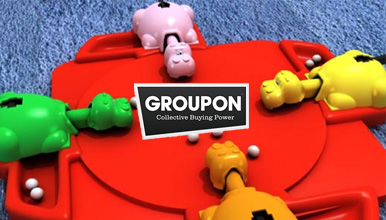 Groupon showed its chutzpah when it turned down a $6 billion acquisition offer from Google last year, and more recently, reports have it that the online coupon giant is seeking an initial public offering at $25 billion valuation, which would make it more highly valued than Google when it went public in 2004 at a $23 billion valuation. Some have argued that Groupon is overhyped and bad for participating vendors, and some that it is worth every penny, but either way, those are some big boots to fill.

Speaking to Bloomberg Businessweek, Groupon showed off what it hopes will take its business to the next level: A new service for smartphones and computers called Groupon Now, the centerpiece of which consists of two buttons: One that says “I’m Hungry,” the other of which says “I’m Bored.”

You click on one, and nearby deals will appear—say $20 worth of Thai food for $12. Unlike Groupon’s classic deals (I can’t believe I’m calling them “classic”; they’ve only been around for a couple years), which can generally be used anytime during a several-month window of time, Groupon Now deals are only valid on that particular day, during very particular hours.

You can guess when these hours will be (hint: not during peak lunch or dinner time). For restaurants and businesses, Groupon Now is attractive because the deals could provide a surge of revenues during otherwise slow periods—while at the same time not cutting into any business’s most lucrative hours.

So: Impulse buying for Groupon customers, and a means for merchants to sell off their spare capacity, and, hopefully for Groupon, a big, untapped market in which to serve as the middleman.

But how unique is this idea, really? FourSquare’s latest update has seen it moving into a similar space, and in a sense, Yelp already kind of is a giant pair of “I’m hungry” and “I’m bored” buttons (albeit without a great deal setup). At that, Groupon has a lot going for it in re: customers, participating merchants, and a cost structure that lets it take a fat profit, and if it can get its marketing machine behind this, originality may not even matter too much.