Okay, campers, rise and shine, and don't forget your booties 'cause it's cooooold out there today. 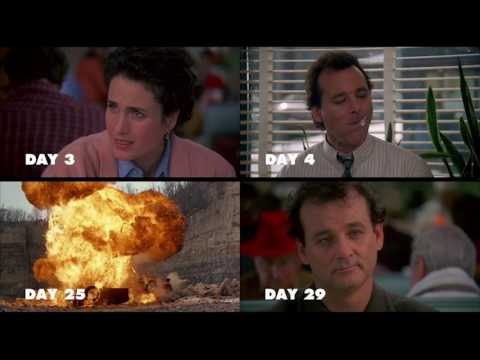 Thanks to YouTuber Neil Fennell, we can watch every single day in Groundhog Day all at once.

In case you weren’t aware, Groundhog Day revolves around the idea that a man is stuck in a time loop of sorts, and has to constantly live Groundhog Day over and over and over again. After Phil, his character, figures out what’s going on, he begins to make larger and larger changes to his day to see what kind of effects can ripple out from his actions. It gets pretty dark as he does some solidly horrifying things (like killing himself over and over again in an attempt to escape the cycle), but for the most part it’s meant to be a comedy.

The movie presents these days linearly (because duh), but if you’re the type of person who likes the picture-in-picture feature on your television, or if you really liked that one episode of Rick and Morty with the parallel universes and uncertainty, then you may very well enjoy this video breakdown of the entire film. A lot can happen in a day, but apparently you can squeeze that all down to 30 minutes of edited footage. Thanks, Fennell.

Also: just in case you weren’t aware, today is Groundhog Day, and Punxsutawney Phil (you know, the groundhog) saw his shadow, heralding an extra six weeks of winter. As sad and as depressing the prospect of a longer, wetter winter may be, at least you don’t have to constantly re-live Groundhog Day here in 2017 over and over and over again. Just imagine repeating one single day of the Trump presidency over and over again for all eternity. Oof.