Sorry, Everyone. Groundhog Day Is the Worst Holiday Ever. 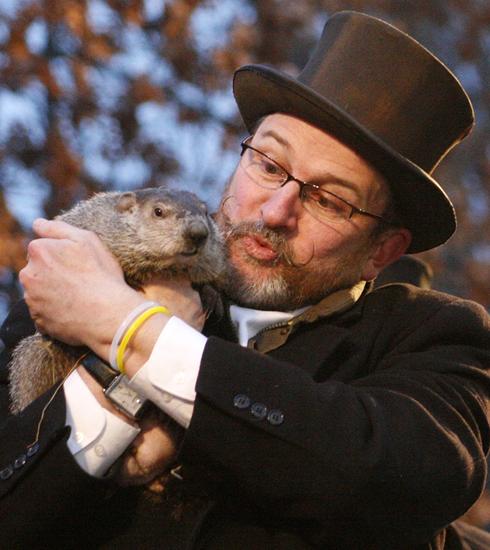 I love holidays. I love to find any excuse to celebrate, and I love a good silly, obscure local tradition. But after some consideration, I’ve had to conclude that Groundhog Day is the worst holiday ever. Worse than Valentine’s Day, though not by much. What makes this tiny little holiday so bad? The coverage of it. The fact that it’s a news story every year, and serious newspeople cover it as if it actually had an impact on the weather. Is it treated as a cutesy, folksy, not-entirely-accurate fluff piece? Yes. But year after year, it never fails: every single news outlet in the country will cover Groundhog Day, report on a rodent seeing his/her shadow, then say, “Boy, oh, boy! I hope spring comes early this year!” Stop it. Stop it now.

Look, don’t get me wrong. I know that no news outlet takes Groundhog Day seriously. None of the people who write the scripts, produce the segments, and say the words actually believes that Punxsutawney Phil (or Staten Island Chuck, or any of their furry ilk) can predict the weather. But why — oh why — must the charade be put on every single year?

REPORTER 1: Well, it’s Groundhog Day, the day when we find out if Punxsutawney Phil sees his shadow and predicts either six more weeks of winter or an early spring!

REPORTER 2: That’s right! Boy, I hope he predicts an early spring! Brrrr! It’s been snowy out here in the Northeast! Because that’s highly unusual for the Northeast, and Phil would be giving us a lot of relief if he didn’t see his shadow this morning, amirite?

REPORTER 1: I don’t know if I can take six more weeks of winter. It’s just so darn cold out there! I hope it’s spring tomorrow!

REPORTER 2: Ooo! Maybe if Phil doesn’t see his shadow, it will be spring tomorrow! Because maybe this year will be different than last year!

Guess what? Spring starts on March 20th this year. The spring equinox happens around the same date every year. That is about six and a half weeks from February 2nd. No matter what Phil saw this morning, there will be slightly more than six weeks of winter. And guess what? This has nothing to do with the actual weather. The way this year is going, it will probably snow the first day of May. Further: Neither Phil nor Chuck saw their shadows this morning. Why? Because it’s overcast. Because there’s a winter storm happening in the Northeast.

My problem is, in no way, with the tradition behind Groundhog Day, nor with the town of Punxsutawney. I would never begrudge a town its silly, fun tradition. Life would be boring without stuff like this and we would have nothing to joke about, no stories to tell, nothing tying us to the people who came before us. I just feel that, as purveyors of information, people in the news business have to knock it off. They sound like morons. I don’t care if they know it’s all a farce, acting like the weather depends on a freaking groundhog. But the fact is, every year, we all have to listen to these people on the radio and watch them on TV, grown adults, talking about a groundhog seeing its shadow, then hoping — like a kindergartener — that the weather will change. (Note: Kindergarteners are absolutely allowed to love Groundhog Day. I’d be sad if they didn’t.)

Maybe I’m just sick of people complaining about the weather, and having to listen to people in professional-looking clothing with impeccably styled hair who are authorities on the weather act like everyday, ignorant schmucks over a furry little animal having some kind of say over atmospheric conditions just makes it even more inescapable. It’s February. It’s winter. It will end, but not any time soon. It’s the same every year. Get over it.