Look at the Gross Thing That Came Out of This Egg 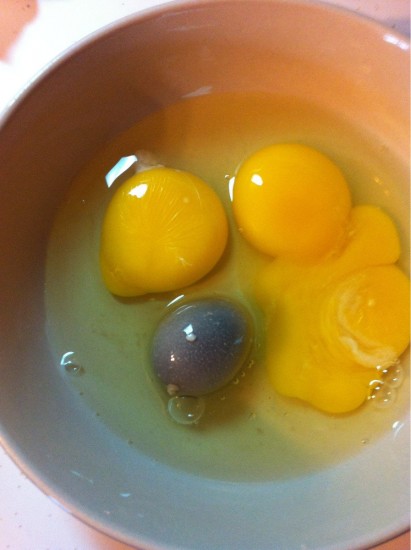 This lovely mystery thing pictured above came out of an egg. Take a guess at what you think it might be, then head on past the break for what one Poultry Scientist — which is also somewhat of a mystery thing — thinks it is.

This picture was posted in the fitting WTF subreddit, and a swift response by redditor ChIck3n115, who claims to have a degree in Poultry Science, provides a fairly believable theory on what the odd item could be:

It looks like the egg came from an older hen (as they get older, there is more chance of abnormalities and double yolked eggs) This is probably a blood clot from either a cut in the oviduct or a bleeding follicle that grew large enough to be treated like an egg yolk. It ended up in the oviduct and the hen coated it with albumen and shell. Things like this happen rarely, and can sometimes stay in the oviduct for extended periods of time and increase in size as the hen coats it in mucus.

The poultry scientist also explains that the mystery item isn’t a result of fertilization either:

And it is certainly not fertilization that causes this. If the egg was fertilized ( shouldn’t ever happen on a commercial egg farm), you would see blood vessels forming around the yolk itself and the embryo growing right on the surface.

In short, something inside the hen was mistaken for a yolk and treated as such, coated with albumen and a shell, making it look like a weird, gross egg.