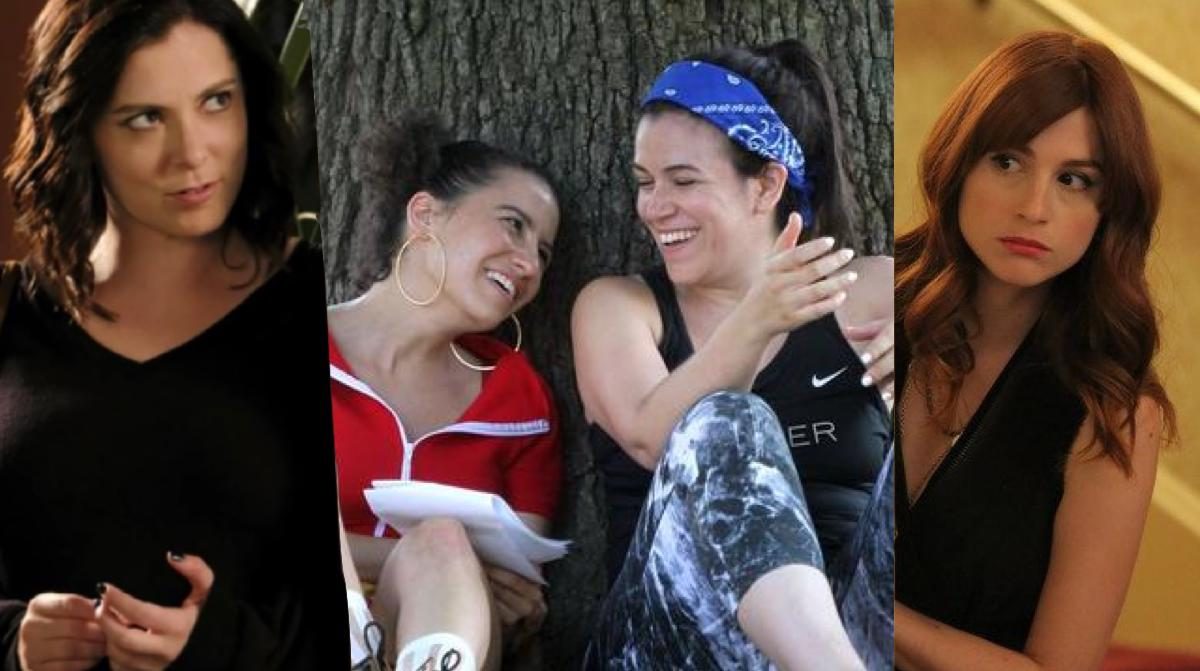 There’s been a changing attitude regarding how we react to non-traditional portrayals of women in media over the past few years, even if the effort of storytellers to diversify women’s stories has been a long and tried task attempted by many. Recently, we’ve seen a rise in complex and refreshing women characters as varied as the stars of Killing Eve and Natasha Lyonne’s leading lady in this year’s delightful Russian Doll.

Still, they’ve normally been shot down quicker and with more unmitigated self-righteousness than any of their straight male counterparts. Women have been allowed to be messy and say the wrong thing, but they’ve still usually been expected to need to toe the line of being “likable” to viewers—like when Skylar White, of all characters, was proclaimed to be the worst character in Breaking Bad.

The acclaimed AMC series leading “anti-hero” is a child poisoning, murderous, and egotistical manipulator, who got brownie points for feeling bad when his brother-in-law died and then didn’t kill his former, recently freed partner. Yet Skylar, his wife received the most flack from people, for having a semblance of agency and being a formidable presence in the face of danger.

Still, a shift is happening (primarily for straight, white women characters—its own box of clichés that are in need a significant amount of narrative space to unpack properly), and it has found much of its most stable footing in the realm of comedy.

The CW’s Crazy Ex-Girlfriend, Comedy Central’s Broad City, and FX’s You’re the Worst never drew in numbers that even scraped what series such as Big Bang Theory and Mom have been able to reach, but their appeal to those who have stumbled across them has been that of near universal devotion. These shows have all taken the comedy labeling and redefined what it means to exist in that genre; their female figureheads reshaped the rules to bend to the will of realistic and sometimes ugly depictions of women.

What makes these shows stoke the flames of such fervent fan bases is their unabashed enthusiasm for pushing boundaries. With You’re the Worst, showrunner Stephen Falk crafts the antithesis of the romantic comedy, focusing on a couple always standing at the back of a crowd, cigarettes lit and scheming on how to get the upper hand on the next poor sap that wanders past them.

We’re not supposed to like them; in fact, we are encouraged against it as we’re repeatedly told from the get-go that they’ll ultimately let us down or leave us anyways. Yet, the writing and performances convince us that even these two scumbags deserve a chance at love, even if it’s with one another.

Aya Cash’s Gretchen, our leading lady, is allowed to be just as “unlikable” as any of the other characters, but the show expects us to root for her to come out on top with the same forgiveness so often afforded to male characters. Her battle with depression is one of the focal points of the show’s second season, and through its realistic depictions of self destruction and mental health, prior opinions on her character are cast in new light.

While there’s still a burning sense of romantic hope that Jimmy and Gretchen might make it work, there’s often a greater argument to be made that they’d be better off without one another in their lives, particularly Gretchen. We saw this in season five, when she was dating a (relatively) normal man, who had a child, an ex-wife, and his own post-divorce angst that forced her to grow up because of him.

He held her accountable in a way Jimmy never did, and those expectations offered her a grounding anchor for the first time in her life, even if chemistry with Jimmy was always going to pull her back to him in the long run. Gretchen is anything but an easy character, and while the theme of the show is about decidedly awful people finding love and growth through one another, her path to redemption was paved by the formidable and incredibly relatable task of self-acceptance and overcoming her own low sense of worth.

She isn’t “tough with a heart of gold” or that archetypal, “rough and guarded until you get to know her” type; Gretchen would rather pull a fire alarm and blame it on someone else than confront anything that hints at adulthood or dealing with the repercussions of expectations and responsibility.

Broad City initially seems to follow in the long and venerable line of buddy comedies that have come before it, but this time, women (and womanhood) are the stars of the slacker/stoner hang-out series. It shouldn’t feel this revelatory, but in a zeitgeist where the Seth Rogens of the world have held a monopoly on that genre for years, it’s finally being (relatively) championed.

Abbi and Ilana—played by Abbi Jacobson and Ilana Glazer—are best friends living in New York City and exploring all of the minor triumphs and escalating pitfalls that come from living in a city in your twenties. Often leaning heavily into situational humor, the show is fearless in presenting the two as beautifully, hysterically, and atrociously human.

They’re sexual, disastrously bereft of tact, and specifically disgusting. They engage in selfish, egotistical behavior, but it’s the single-mindedness backing each of their adventures that allows us to relate to their mishaps. It’s elevated absurdism with a steady, pulsing heart, with two larger-than-life women at the forefront.

Abbi and Ilana get to be funny in the way men have always been allowed to—loud and elastic, broad and deeply felt, their humor universally recognized because we’ve seen many of the individualized elements before. Broad City has simply repackaged it so they feel authentic to this very time and place where the series exists. Broad City, along with You’re the Worst, has also made great strides in allowing their characters to explore their sexuality without needing to slap a label on the character or the episode, addressing a liberating sexual freedom that, for so long, has evaded women characters.

What makes it better is that this can happen to a character like Ilana, who uses kitchen appliances for “hygienic” purposes, or Abbi, who can get so caught up in a charade of proving a point to an ex that she winds up injuring herself in the most convoluted way imaginable. They’re impossibly imperfect individuals who barely scrape by, work jobs that barely pay rent, and adore one another unconditionally.

Similarly shining the spotlight on a late twenty-something barely scraping by (in her own way), Crazy Ex-Girlfriend has successfully managed to act as a launching pad for an incredibly nuanced crop of storylines that run deeper than that of an embittered ex-girlfriend looking for love. Rebecca Bunch’s (Rachel Bloom) characterization and continued growth has far outreached the boy that first inspired her to move across the country and start a brand new life, and the show—for all its splendor, high drama, and show-stopping musical numbers of season one—has only gotten better with time.

Her ability to self-sabotage any and all stability she’s created for herself is astonishing as we watch (cringing) each season as she manages to obliterate her current situation for something often increasingly chaotic. Rebecca sings because it’s how she communicates what she’s really feeling when all reason and judgement has left her. The songs are the most honest she ever is with herself, letting the audience know that even when she’s making poor choices, there’s a small part of her that recognizes what she’s doing is wrong.

All of us have a level of awareness and duality, where we can acknowledge our lesser moments as being just that, but can rationalize our way out of feeling the real sting of repercussions.

Crazy Ex-Girlfriend refuses to make Rebecca (or any of the characters) easy to root for, even deliberately writing sequences so determined to push your secondhand embarrassment button that your first impulse might be to look away. She’s brilliant, yet doesn’t know how to manage her money; is mystified by her own shortcomings (for the first few seasons at least); is capable of genuine, hard-earned insight; and flits between being a master manipulator and a dependable, avenging friend.

She’s complicated in a way that the “crazy” moniker as a purposeful misnomer. She has her battles, sure, but it’s her ability to fight tooth and nail to overcome her struggles that makes her all the more rewarding. That same scrappiness can be seen in Gretchen’s willful stubborn and destructive survival nature, and Abbi and Ilana’s ride-or-die friendship.

As women, we’re equally volatile as we are compassionate, cold as we are earnest, competitive as easygoing, and composed as we are walking disasters. It shouldn’t be such a reach to find a series that makes it a mission to herald voices of such strength, and as mentioned earlier, there is far more to add to the list (Amazon’s Catastrophe, HBO’s Insecure, Hulu’s Shrill, and Pen15 all come to mind), but when these three shows all started, there was a thread of similarity that tethered them in the minds of viewers.

Each of these leading women are written with a declarative foot stamp and rallying voice that champions their heartache, celebrates their successes, and mourns every ounce of self-reflected failure. Greater still, though, they’re seen through the eyes of writers with genuine compassion for the women they’re writing for, replacing the long-held standard of likability with the far greater theme of relatability.

All these achievements are clearing an admittedly and depressingly low bar, but when it’s one that has been overcome so infrequently that the triumphs stand taller. We need more women like Abbi, Ilana, Gretchen, and Rebecca to aid in fostering new talent and visionaries who show women onscreen who are slobs, who work temp jobs to make it month to month, who are battling stigmatized mental illnesses, or who are looking for love but must learn to prioritize self-care—all women you could meet any day in real life and all of who are ready to push their stories even further.

Ally Johnson is a film critic and the Film Editor for TheYoungFolks.com. She’s a film and television writer for CambridgeDay.com and ThePlaylist.net and her byline can also be found at VagueVisages.com and MUBI Notebook. She is a member of the Online Film Critic Society and Boston Online Film Critics Association.