Gravity Falls Rewatch: 'The Hand That Rocks the Mabel' | The Mary Sue

Gravity Falls Rewatch Recap: “The Hand That Rocks the Mabel”

Say friend, have you heard the cute news? 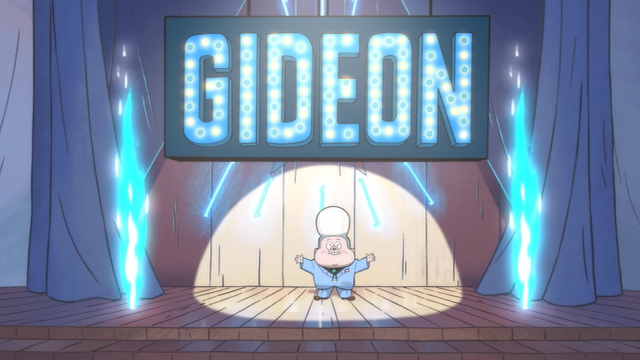 The twins meet Gideon Gleeful, a nine-year-old supposed psychic who’s Stan’s biggest rival in scamming the population of Gravity Falls out of its money. Mabel takes a shine to Gideon’s flair for the sparkly things in life; but while she’s looking for friendship, Gideon is dead set on pushing for something more.

And here we have the point when the show first transcended from “good” to “great.” The introduction of Lil Gideon is all hands on deck as far as balancing character and joke-based humor, showcasing each twin as well as their bond, parading the increasingly astonishing horror elements the show would become somewhat infamous for, and adding a shiny new piece of the puzzle to the larger mystery of the show in the form of Gideon’s journal (by the way, if you’re wondering: he found it somewhere, your guess is as good as mine). This week’s script was penned by Hirsch and Zach Paez, who contributed to some of season 1’s more episodic outings (“Fight Fighters,” for instance) and some of season 2’s heaviest hitters. He’s also a contributing writer to Community.

It helps that Gideon is such a great antagonist, particularly in the first season (before he’s supplanted by other, larger threats). He’s able to be hammy, petulant, and legitimately menacing at various points throughout the episode, and they all gel together into a cohesive character. Episode Director John Aoshima, who also headed the exceptionally eerie “Summerween” and “Dreamscaperers,” plays beautifully with lighting and perspective for various scenic moods: lots of warm, artificial light on Gideon’s public appearances, sickly greens in the privacy of his bedroom (“I CAN BUY AND SELL YOU, OLD MAN” is maybe one of my favorite moments for the character, period), and sometimes nothing more than a showed silhouette to showcase the menace of his influence. It’s top notch stuff, building on an already stupendous performance by Thurop Van Orman. While there are supernatural elements to the script, the striking thing about Gideon is how ultimately mundane his brand of threat is.

It isn’t new territory to comment on Gideon’s role here as the “Nice Guy,” a very specific brand of awful that has only begun to be torn down in any way in the last few years or so. But it bears repeating how relatable Mabel’s plight is in this episode: in addition to just being a compassionate person, she’s been socialized not to make a fuss, to be accommodating in order to hold this friendship she values together (an onus that nobody thinks to place on Gideon). Every time he pressures her for a date she begins with a concrete rebuke (“let’s just be friends,” “you said one date, and this was it”) that Gideon then wears down, often by confronting her in front of others and painting the situation so that she’ll seem cruel for refusing. If she refuses, she’s “mean” (to use the PG terminology), and if she goes on without being actually interested, trying to preserve the friendship she values, she’s “leading him on.” There’s no winning here for her.

And the episode is fairly unique in how long it waits to show its hand on Gideon’s true colors—“unwanted suitor” episodes aren’t uncommon in television, but they almost universally write the other person as unlikable to audience and characters from the get-go, to avoid having to comment on this cultural trend of the poor, overlooked young person (usually man, barring the Eponines of the world) who pines after their friend and is rewarded with love for their dogged persistence. Which is a gross, terrible lesson to be teaching. And it’s refreshing that this episode exists for that very reason (not that there aren’t people who apparently missed that element entirely, thus making yours truly reach for the hard liquor).

On the subject, a word on something I see brought up fairly consistently when discussing the show’s forays into social commentary: no, Gravity Falls is not Steven Universe. It simply doesn’t have the same consistent thoughtfulness toward inclusivity in its staffing or scripts. And while I firmly believe that it’s always worth agitating for broader representation and more thoughtful usage of tropes in popular culture, I’m not really upset that Gravity Falls exists in the place where it does. Being “progressive,” after all, is not a set of fixed terms that everyone should rush to the finish line on. It’s (for our purposes) a system of thought that tries, constantly, to be aware of one’s place in the world and how certain voices and thoughts are elevated above others (and why this is so, and how it can change). And everyone spends their lives on a spectrum of coming to understand those concepts and apply them to their lives. And you know what? It’s hard. I doubt not for a second that there are people out there, young and old, that saw this episode for the first time and sympathized with Mabel, and that was the first thought they’d had that maybe being a “nice guy” wasn’t such a great thing. That is affected the other person in a way that made them unhappy and uncomfortable. Maybe that’s somebody’s starting point to beginning to think outside themselves. And I kind of love that idea.

You can even see the show itself going through that learning process—there’s a conversation scene between Wendy and Mabel in season two that likewise deals with crushes, and is absolutely worlds more nuanced and mature on pretty much every level. Growth: ideally it’s happening to all of us, albeit at different rates. 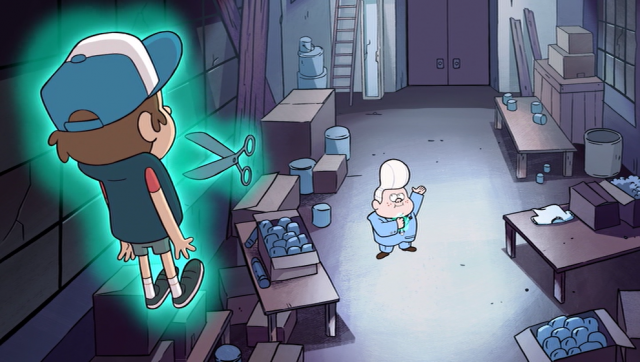 A brief moment to discuss the “apes are funny” rule. Josh Weinstein, a former Simpsons showrunner who came onto the GF writing team for season 2, was once asked if there was any kind of in-joke or particular meaning to the amount of primate-related jokes that cropped up on the Simpsons. His response? “Apes are funny.” Sometimes patterns will be intentional, with in-narrative meaning. And sometimes recurring bits will crop up just because there’s an idea or motif that strikes the writers’ fancy. It’s one of those things, particularly in a show that does court conspiracy so enthusiastically as Gravity Falls, that can be hard to discern until the show is over. It also ties into the Simpsons influence that I mentioned in the first recap: there’s a deep love for visual gags you might not even catch until the fourth or fifth watch, with an easter egg mentality that’s not really meant to tie back to anything especially serious.

But let me save you a great deal of heartache, and the investment of a fan theory we’ll probably be touching on down the line: “Carla,” as best as I can tell, is an “apes are funny” thing. It shows up in the credits cipher, probably as a payoff to the name being mentioned as part of Gideon’s disclaimer, and we’ll see it worn by a couple of other characters later. It was the center of quite the conspiracy.

In more interesting trivia, Gideon’s ridiculous hair originally tied into a potential plot about him having a Basket Case-style sibling growth hiding under there. This was eventually scrapped, but somewhere there’s a universe where that idea came to full, horrific fruition. I’m sure they, too, ate people and wreaked widdle ole havoc. 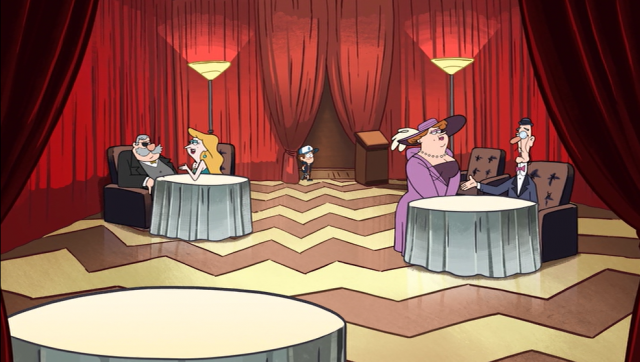 Credits Cipher: Carla, why won’t you call me?

The title of this episode is a reference to the poem (which also became an idiom on its own), “The Hand that Rocks the Cradle is the Hand that Rules the World;” in other words, influence over the next generation is the ultimate power an adult can wield (something of an irony here, given Gideon’s relationship with his parents). There’s also a 1992 movie by the same name that, uh … does not have anything to do with this episode, believe you me.

But that aside, there are quite the number of nifty homages in this episode. Gideon, at least in terms of visual design, is based on a 1960s child preacher by the name of Larry Hal Larimore—you might’ve noticed that the born-again/faith healer vibe is quite present in Gideon’s show, even if it lacks any kind of overt references. That fact also led to what might be one of my single favorite, almost never commented on homages of the series: Mabel comes back from Gideon’s makeover wearing one heck of a Tammy Faye Bakker look.

And, of course, we have one of the show’s first (but certainly not last) references to Twin Peaks in the form of The Club and its familiar black and red layout. 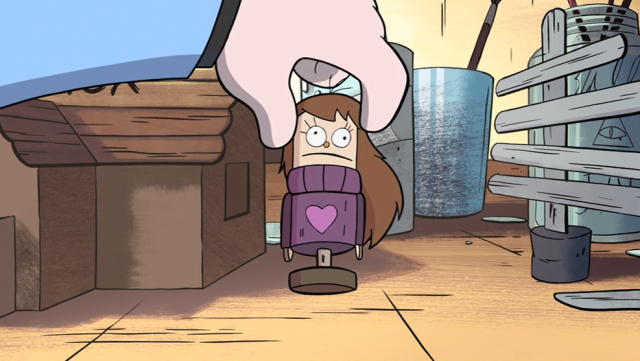 Not a lot this week, surprisingly!

This is our first nod to Stan’s prison record, as well as the more central revelation about Gideon finding one of the journals (we can presume that they were hidden in separate places to maximize the difficulty in reassembling the portal, and that Gideon stumbled upon his in a similar manner to Dipper).

You can also get a really early (even more so than the HTML ARGs that eventually revealed it) glimpse of Bill’s name here—check the jar on Gideon’s desk, which was probably missed at the time due to having a more traditional “eye of providence” sketch alongside the script.

An interesting thing to note, neither here nor there, is that Dipper uses his own notepad this episode rather than making notes directly in the Journal—he’s not so dependent on it yet, but at the same time he’s also not confident enough to be actively marking over the Author’s theories with his own additions and adding new pages (as we’ll see him doing later).

Vrai is a queer author and pop culture blogger; they’ve fallen fully down a nostalgia sinkhole from which there may be no escape. You can read more essays and find out about their fiction at Fashionable Tinfoil Accessories, support their work via Patreon or PayPal, or remind them of the existence of Tweets.