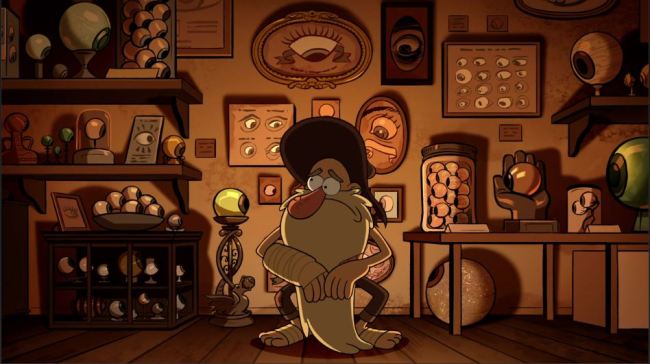 After seeing a label for McGucket Labs on the ruined laptop, Dipper suspects that Old Man McGucket might actually be the Author. Unfortunately, McGucket himself isn’t sure, since his memory was erased by the mysterious Society of the Blind Eye. As it turns out, Fiddleford McGucket was actually an ASSISTANT to the Author, and created both the memory gun and the Society after being unable to cope with the town’s weirdness. The kids are able to break up the cult and help McGucket begin to restore his lost memories, thus bringing them one step closer to solving the town’s mysteries.

Here’s a fun thing right off the bat: if you were watching and scrutinizing the previews that led up to new episodes (which was most of us), Disney XD basically ruined the conceit of the first half of this episode. The “Old Man McGucket wrote the journals?” line was included in some of the teaser footage (usually ever so slightly scrambled)….basically confirming that it was a red herring. Which was a real blow to a lot of people, given what a popular theory that was (you may recall the fake screenshot from a previous recap). The whole episode winds up feeling a little bit of an homage to the also-ran, up to and including Dipper including McGucket’s cast on his theory board (the going idea being that he’d had a sixth finger removed or it was under the cast) and jokingly referencing the beard bandages.

As is often the case during the Big Reveal episodes, I find myself wanting to say IT WAS REAL GOOD and leave it at that. These moments are obviously meticulously planned and take care to give a good showing to the characters who’re featured. This one in particular is one of the best kinds of twist, filling in a gap a lot of viewers might not’ve even thought to ask: why aren’t the residents of Gravity Falls noticing all the weirdness that’s constantly besieging the town? That this episode answers it so deftly while not raising questions of “why didn’t this come up before” (because secret society, duh), speaks to the care the crew put into the show’s worldbuilding, which has always been one of its best strengths (and it does an excellent sleight of hand to help set up for the finale later, too).

Obviously this is McGucket’s episode at heart (no, you’re not the first person to compare him to Simon Petrikov), and Hirsch does a great job with the episode’s pivotal ending moments (really, considering he plays McGucket, Stan, AND Bill, there are no shortage of big s2 scenes for him to steal).

Watching it again, though, my favorite moments are actually the scenes between Wendy and Mabel. There seemed to be a concerted effort in season 2 to try interactions that hadn’t been covered before, and this is one of the greats. Wendy, constantly stressed or no, is a great chill presence for Mabel to bounce her energy off of, and it’s sweet to see the older sibling fondness she has for both twins without the filter of Dipper’s awkward feelings. And while Mabel’s subplot isn’t quite subtle, it’s an exceptionally great lesson for a kid’s show in particular—bad experiences, and ideally learning from them, help make up who we are.

Also? Them standing up for Lazy Susan gets me every time. It’s such a small goof, but so much of media is built on assuming that women should compete with each other that it’s really nice to see that explicitly smacked down (see also: the BEAUTIFUL queen of the manatees). 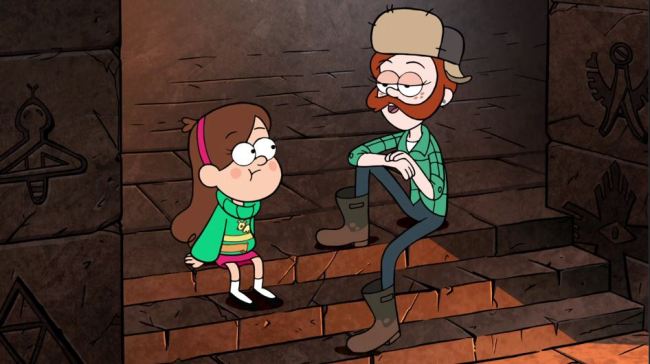 And from two seconds of unexplained animation, an entire subfandom exploded. I’ve mentioned before that Alex Hirsh is friends with Rick & Morty creator Justin Roiland, whom he met while working on The Marvelous Misadventures of Flapjack. And, because why not, the two have since included references to the other’s work in their own shows. This includes appearing as voices (Hirsch was high schooler Toby Matthews, Roiland plays Blendin Blandin) and visual references (Bill is on a computer screen in “Big Trouble in Little Sanchez,” there’s a plumbus in Journal 3).

But the most ambitious ploy was a background detail in “Close-Rickcounters of the Rick Kind,” where an unremarked upon coffee mug and pen pop out of a portal in a really visually busy shot (on an episode that aired 4/7/14). Then, six months later (10/27/14), “Society of the Blind Eye” airs and has the portal in Stan’s basement suck in a mug and pen. Lo, the two multiverses canonically overlap. And since the makeup of the R&M multiverse concludes that there are infinite possibilities in infinite universes, this pretty much opened the door to unending fanfic prompts forever.

I would be lying if I said my favorite part of all this wasn’t the official (purely by dint of being drawn by Roiland and Hirsch, mind) art of the two shows’ old geezers getting cuddly. It’s cute, alright?

(… especially this one from the 2016 charity livestream) 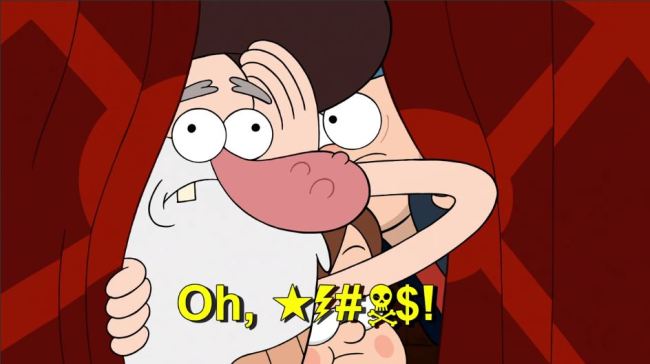 PAGE CIPHER: Gideon’s Tantrums, Misspelled Tattoos, Shandra’s Rejections, Society’s Views, A Fear Of Witches, A Life Of Regret, These Are The Things That They Try To Forget

As with all episodes that reveal a big chunk of the plot, this one has a sizable chunk of codes and hidden information scattered around the episode. Most notable on the list of things that are still unsolved, even after the end of the series is the memory canister labelled “Jeffrey Cannuck.” It would SEEM that this was an important person, since his memories were stored right next to Blind Eye founder McGucket and richest man in town Preston Northwest, but the name never showed up again. THE MYSTERY CONTINUES, ETC.

There are also two major coded messages: the first is on the Journal 3 page for the Blind Eye, which both reveals Fiddleford’s identity and is The Saddest. “If my suspicions are correct, this is the work of Fiddleford. Does he really have to go to such great lengths to forget?” Which… we’ll discuss further down in the next section. The other is from McGucket’s memories, where he was speaking in an Atbash cipher. The translation is “Bill Cipher, Triangle,” as you might’ve guessed from the triangle he makes over his eye. 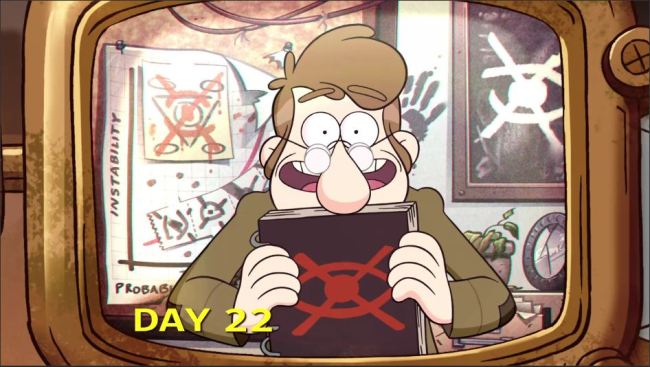 It is amazing how many of the adult characters in this show shoot themselves in the foot in some way or other. I suspect this is no coincidence. Partly because of Bill, the motif of “eyes” are everywhere: what one sees and what one doesn’t, what is hidden and what you willfully refuse to acknowledge.

All the important adults in the twins’ lives were in some way hindered by a refusal to face something. Ford powered ahead with the project and refused to heed any of Fiddleford’s warnings, Fiddleford scrambled his mind trying to forget, and Stan tried to ignore the paranormal rather than help safeguard the twins against it. The key to each of their character growth moments is in their willingness to face the truth and their failures.

Incidentally, this is a case where getting a copy of Journal 3 does a lot to help flesh out the narrative and give an insight into what happened with the project. Fiddleford was indeed an anxious person before coming to Gravity Falls, making him possibly the worst choice of an assistant to Ford, who spent his life studying weirdness and unfailing holds his own limits and tolerances as the standard everyone around him should work to achieve.

While we see the major breaking point later on in the show, the book has more time to build up a series of traumas for poor Fiddleford to go through (kidnapped by the Gremloblin, impersonated by the Shapeshifter), and to really hammer home that Ford’s willful ignorance applied to more than just Bill (for instance, after Fiddleford invented the memory gun, Ford told him, “No, don’t,” and figured that was the end of things… it wasn’t). It’s a story of pretty tragic flaws between two characters who are both bad at handling things outside of their worldviews, and thus succeed at making each other’s lives worse and worse (that’s a reconciliation I’d have liked to see more of, but I can respect that it’s backgrounded enough that there wasn’t a lot of time to spare for it).

Vrai is a queer author and pop culture blogger; they find Dipper’s confession this episode waaaaaay too relatable. You can read more essays and find out about their fiction at Fashionable Tinfoil Accessories, listen to them podcasting on Soundcloud, support their work via Patreon or PayPal, or remind them of the existence of Tweets.