It's about sounding terrible TOGETHER! 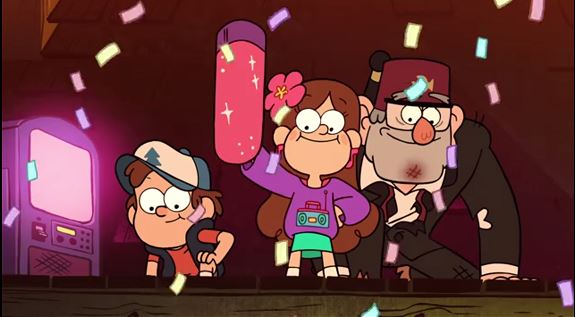 Stan’s work on the portal attracts the attention of the government, who come sniffing around at the worst possible time. While Stan wants them gone ASAP, Dipper sees a chance to finally get someone to take him seriously about his paranormal discoveries…and trying to prove himself ends in the summoning of an undead horde.

This episode was part of a two-part premiere with the next episode, “Into the Bunker”…kind of. Sort of. See, originally this episode aired August 1st on the regular Disney channel, then again on the 4th on Disney XD–which then had the world premiere of the second episode right after. I was not kidding about those scheduling kerfuffles.

Even with that long gap, not to mention a brand new addition to the staff–Jeff Rowe, who went on to work on quite a few of the season’s heavy hitters–this is an excellently executed premiere that makes excellent use of its allotted time. In the space of 22 minutes, it reintroduces the Journals, recaps last season’s finale, gives a character-defining moment for all five main cast members, sets the stakes for three opposing factions, and defines a driving conflict that will power the season at least to its halfway point. It is fine, efficient storytelling.

It’s good-looking, too–there’s a lot of color washes used, from the hellish reds of the near-death scenes to the sickly greens of totally-not-Hell, to the cool blue of the attic. We’re going to have an ongoing tracker this season of “how did that get past the censors,” by the by. In this case, there is an astonishing amount of green blood spatter and more than a few dangling intestines. Which is totally cool for a Y7 rating, I guess. 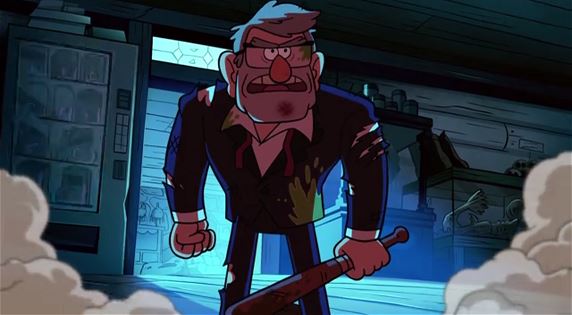 After a year of waiting (a YEAR–if you’re wondering about the show’s unexpected turn into a period piece, it did in fact begin airing in 2012), the trailer for season 2 finally aired at 2013’s San Diego Comic Con. The trailer came with the announcement that the show would be moving to Disney XD. This meant two things, practically speaking. First, the show would be far less accessible, since the main Disney channel came with basic cable but XD required a premium package–something which would’ve been disastrous for series ratings if it hadn’t developed such a devoted fanbase (look no farther than the case of Wander Over Yonder).

Second, although Hirsch claimed that the move to Disney XD wasn’t a direct corollary to the second season’s darker tone, it is true that DXD as a network is home to more action-oriented programming or shows otherwise skewed toward an older demographic. Which probably did the show nothing but good when it came to grappling with S&P. Well…mostly. As long as it was related to horror content (oho, I haven’t forgotten about you, “Love God”: we’ll get there).

Between the seasons were several shorts. They’re pretty neat, but mostly standalone, and the few that have plot-relevant tidbits are pretty tough to discuss without having a full-on spoiler post (as a neat tie-in though, this episode’s co-writer Matt Chapman also wrote most of the Dipper-related shorts). We may come back to that in future.

…Oh. And this was the episode where the fanbase majorly got the hots for “Hunkle” Stan. A whole generation of silver fox enthusiasts was created that day. 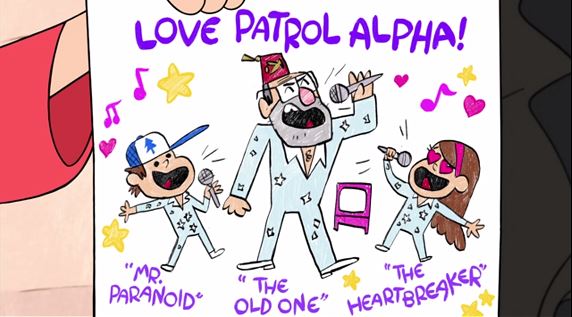 PAGE CIPHER: “The Man Downstairs Is Very Clever. Can He Hide His Plans Forever?”

A new season means a new cipher. The vignere, in this case, which is actually a two-parter: you have to have the scrambled message, and the key word that shows you how to align how certain letters were switched against a pre-existing chart called the Vignere table. So, you would take your “key” word (in this episode it’s “widdle,” and can be seen in Gideon’s cell), and type it out to fit the number of letters in the message (here, WIDDLEWIDDL). Then you’d look at the chart and match the letters; since the first letter of the message is “w” and so is the first letter of the key, you’d go to the place where those two match up on the key–which is the letter “s.” And so on, for the whole thing, but in reverse.

Granted, someone made a decoder that will do this for you automatically as long as you know the scrambled message and the key, but things got intense fast. While the key was pretty easy to find in this episode, Hirsch and co. got downright dastardly about it over time, up to and including hiding multiple pieces of a keyword in different freeze-frames throughout the episode. And someone would still have it decoded within the hour.

Season two also introduced journal pages after the credits with messages in a much simpler numerical code, which usually add either a bit of foreshadowing, a thematic comment, or an extra factoid about the events of the episode.

In non-code related additions, from here on in you’ll be able to see Agents Power and Trigger (or something related) in the background of almost every episode.

(I’m also in the process of getting ahold of Journal 3–that may merit its own post.) 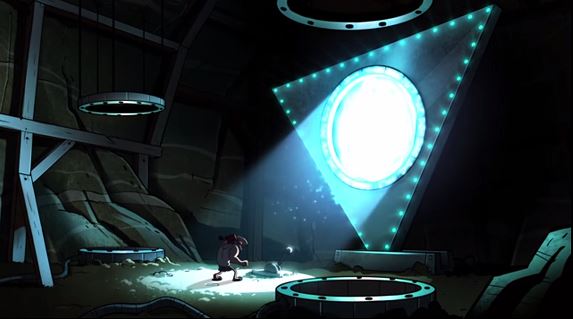 Lies! Everyone is telling them, and it is going to cause so many problems. On the whole, it’s not surprising Stan would think that way, given both his background as a con and the disastrous results of trying to tell Ford the truth only to be ignored; but there’s something unspeakably tragic that his regret in failing to protect the kids is that he didn’t “lie well enough,” rather than sharing knowledge to prepare them for what was to come. This is a flaw he and Ford both share, actually–no doubt in part due to some garbage “real men are stoic” lesson imparted by their father.

Stan’s able to drop it far more quickly than his brother, though, since his reason for lying tends to be either to keep himself out of trouble or to protect the kids from experiences he thinks might be harmful to them. Meanwhile, Ford attaches his ego to being a gatekeeper of knowledge, the best and the smartest who has all the secrets about important stuff. I cannot imagine why this turns out to be a problem.

You probably all noticed the six-fingered glove, but there’s also a second clue about the Author that’s blink-and-you’ll-miss-it. When the agents are looking at readings from the portal, they ponder as to whether the energy is coming from “deep space.” Apparently the UFO parts Ford scavenged give off a recognizable sort of energy; no doubt something like what’s hidden in Area 51 or some other alien-related conspiracy.

Vrai is a queer author and pop culture blogger; they would rather not admit how often they listened to that karaoke number. You can read more essays and find out about their fiction at Fashionable Tinfoil Accessories, support their work via Patreon or PayPal, or remind them of the existence of Tweets.