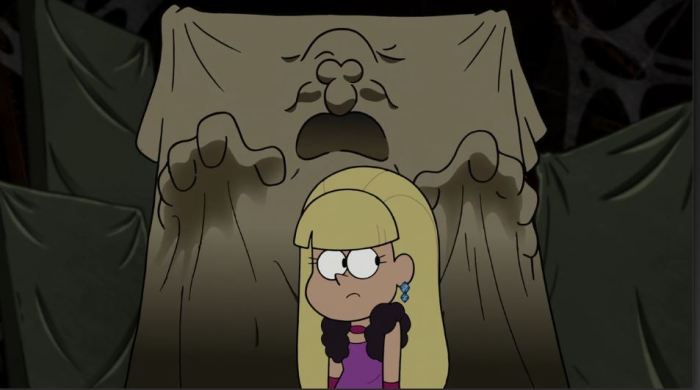 Pacifica recruits Dipper to exorcise the ghost haunting Northwest Manor threatening to ruin the Northwests’ annual fancy shindig. Said ghost, it turns out, is the vengeful spirit of a lumberjack (an ancestor of Wendy’s, in fact), who was betrayed by the Northwests. Forced to reexamine her life after learning of her ancestors’ many misdeeds, Pacifica starts to break free from her family’s bloody history by breaking the curse and letting the common townsfolk into the party.

This is maybe the show’s best triumph at bringing back a background character and rounding them out. Yes, even more than McGucket, whose backstory makes a great twist but is also tied up in service of the larger mystery. Pacifica’s arc is the human backbone of this episode, the grounded flip side of the “what goes on behind closed doors” theme running through the episode.

Being responsible for disrupting the ecosystem of an entire town and also working more than a few of its residents to death is undeniably terrible, but also pretty abstract, as are most of the Northwest Family’s crimes. The idea that Pacifica’s parents are abusive is a far more widely relatable human ugliness (more on that down in the spoilers section). What’s doubly impressive is that it expands on her character in a way that’s been planted in at least her previous appearance, and makes sense within her initial stereotype of dismissive mean girl perfectionism.

It’s not excusing her either, since Dipper is around to give her a satisfying earful over her previous behavior and the resolution requires her to make an active (and costly) change in her behavior. Honest but not cheap is a hard balance to pull off with stories about rounding out former bullies, especially when stories became glutted with lazy versions of the trope over the last 20 years.

If there’s any regret it’s that once again Mabel’s plotline is pretty throwaway here, if satisfying in its determination to give Grenda a win and at least try to skirt the more irritating “friends fighting over a boy” clichés. My sadness that Mabel and Pacifica never really got to work on the germ of a friendship they showed for an instant there remains a personal “ah, well” at this point rather than a true narrative failing.

And as a ghost story, it succeeds with aplomb. This is probably one of the show’s scariest episodes in terms of pure visuals, maybe the top once we exclude episodes involving Bill-related body horror (though the horrible woodland hellscape of party guests comes pretty close to even that). The lumberjack’s design balances being evocatively disturbing without dipping overtly into being gross (what’re the odds that missing eye popped right out when he got the axe to the skull, for instance), and is still versatile enough to encompass the softer, remorseful expressions of the backstory and finale. It’s just fantastic, making sure to take extra care where other monster-of-the-week shows might leave a humanoid design to be somewhat lackluster.

I would like to remind you once again that everything in this TV-Y7 episode was okayed by Standards and Practices, including the flaming skull-axe skeleton and the taxidermy animal heads dripping blood, but the little old ladies from “The Love God” had to be stopped. There might’ve been twenty minutes of good stuff going on in this episode, but I can tell you that the fandom had its eye exclusively on the last two. Specifically, that tapestry. You couldn’t shake a stick without finding some apocalyptic Bill imagery (particularly since this was around the same time of the Bill Cipher AMA, which we’ll talk about in a few episodes, so much hay was made of the fact that Bill had been messing around and talking to Gravity Falls folk for at least centuries).

And, because this was also at the height of the “we suspect Dipper might become an antagonist as part of his search for answers” trend (or “dark Dipper,” to be more concise), pretty much everyone was convinced that the burning tree in the tapestry was some manner of prophesy foreshadowing a terrible fate for Dipper. Spoiler alert, this falls in with “the code to the vending machine is a ‘c’ like in cipher” as things that seem like plausible clues but don’t go anywhere.

To cement the focus on the episode’s ending, the premiere of this episode coincided with the creation of another ARG website. It was less interactive than most, but did feature a replica of McGucket’s laptop screen, and the countdown. This wound up being one of the few times in the entirety of season two’s airing that there was an unshakable, concrete marker of when the next episode would be airing. Which it did! And then there was another months-long hiatus. CREDITS CIPHER: Next Up On UTBAHC: Did Aliens Write The Constitution? Crawdads In Tiaras! And Florida: The Show (KEYWORD: Cursed)

In odd animation quirks, Marius does in fact have something on his shirt – but only for one shot. And speaking of Marius, one of the ciphers hidden in a supplementary book, Dipper and Mabel’s Guide to Mystery and Nonstop Fun, mentioned that Grenda “marries rich.” So…how about those childhood sweethearts, I guess?

On the callback train, we have Dipper turning into a wood statue in the exact pose the shapeshifter threatened him with.

And in a final note, this episode was mislabeled pre-release as “Northwest Mansion Noir,” which I maintain to this day would’ve been the cooler title. I think this might count as the one time an embellishment in Journal 3 diminished the effect of something shown in the show. This episode covered a lot of ground in humanizing Pacifica, establishing that Pacifica’s general haughtiness was well within the same realms of “but they’re twelve though” that apply to missteps on Mabel and Dipper’s parts (as opposed to Gideon “literal attempted murderer” Gleeful, though even he got a second chance eventually).

The part that drove that home in the most unexpectedly cutting way was that bell, which pushed Pacifica’s parents from the “possibly just assholes” category in which they resided during “The Golf War” to “clearly emotionally abusing their child.” Dipper’s commentary in the Journal is that they punish her with “groundings and credit card cutoffs when she disobeys.” And then things kind of veer off in the direction of sweaty hormonal adolescent, Girl Look Good In Evening Gown. Eh, I’m sure the shippers are happy to have a bone thrown their way.

Mostly though, the goof kind of pulls the rug out from under the powerfully ugly image of Pacifica’s parents training her to the sound of a bell, to the point where in the episode proper, it clearly takes a lot of effort and internal battle to stand against her parents. And then there’s the fact that we never hear what the fallout from the night of the party and Pacifica disobeying her parents was in the lead-up to the apocalypse. I know I desperately need to think that when McGucket bought the mansion at the end of the series he also became Pacifica’s Doc Brown style mentor-father-figure, because otherwise the thought of her having to spend another six formative years in that family fills me with crushing sadness.

Vrai Kaiser is a queer author and pop culture blogger; they’re very concerned for this fictional child, actually. You can read more essays and find out about their fiction at Fashionable Tinfoil Accessories, listen to them podcasting on Soundcloud, support their work via Patreon or PayPal, or remind them of the existence of Tweets.