You gonna buy something or what? 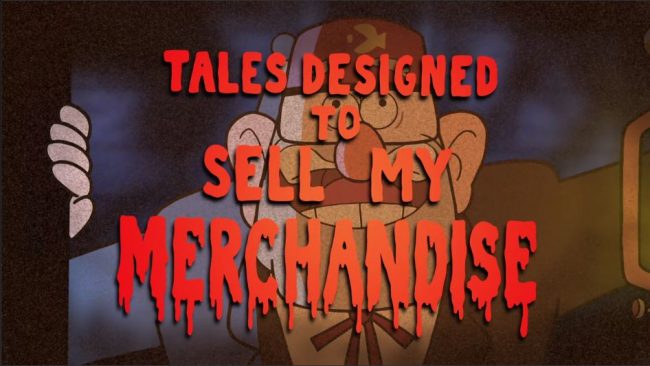 An unwary visitor pays a visit to the Mystery Shack, where they’re subject to Stan’s tall tales: stealing a cheap watch from a witch costs Stan his hands, Waddles becomes super-intelligent and suddenly has no time to hang out with Mabel, and the Pines discover that stop-motion animation is actually the work of black magic.

While season one’s anthology episode “Bottomless Pit” had a few nice moments in it, this edition tops it in just about every way. It’s a benchmark for how well the writing team has grown since starting the show, and how much more they’ve been able to stretch their wings in the second season. No doubt knowing at this point that the show would only last two seasons, it seems as if the writers threw in every neat idea that wasn’t meaty enough to sustain a full episode or was too weird to technically count as “canon” (since it’s implied Stan made up every bit of what we heard).

The result is a vibrant and strange bit of experimentation that uses its break from continuity to explore what could be (or couldn’t, but is really cool). It’s exactly what this kind of episode should be. It can’t even be said to exist completely outside the ongoing narrative–it’s just that thematic resonance is best discussed down there in the spoiler space.

The stop-motion segment is arguably the highlight, blending its 2D and 3D models beautifully and making solid visual gags out of the funding limitations there in the final stretch. Our three Pines each get a chance to show off some good jokes, though by and large this is Mabel’s episode (but considering how often she plays second fiddle to Dipper as protagonist in season one, I can’t say I feel too bad about that). And the use of the first-person camera works astonishingly well at unsettling us into the position of an outsider despite how well we know these characters and this world–the hellish red lighting, the way Stan manipulates the camera as much as he controls the stories he tells “us”–it’s impeccable work. 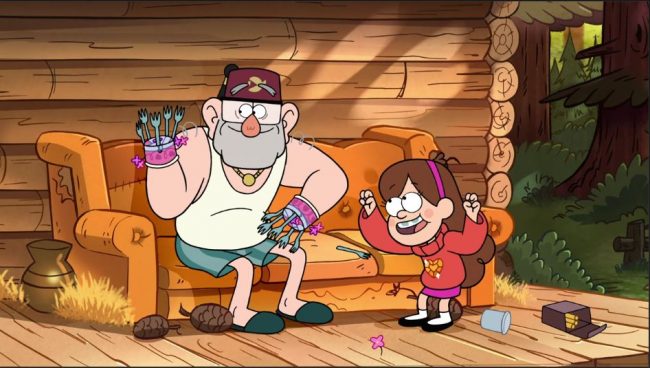 Since Stan is a man with his share of secrets, there was no shortage of theories about him. One persistent one – which I think still lingers in some more hardcore tinfoil sections of the internet–is the idea that Stan isn’t the twins’ great-uncle but their grandfather. Some of the idea came from the fact that Stan is said to have been based on Hirsch’s own grandfather, some sensing a conspiracy around the fact that “great-uncle” isn’t as commonly used a relation as the former, and some from Stan’s monologue here about “getting the girl” (for the record: a total untruth, though telling about Stan’s view on relationships).

In fairness, the actual answer is pretty tangential to the actual story, so much I can go ahead and tell you without spoiling anything: Stan has a much younger brother named Shermie, who was still a baby when Stan was in high school, and that’s literally all we know about him. One of those handwaving things to clear up the logistics that aren’t actually important to the story Hirsch wants to tell.

I’ll be honest, I’ve never put much stock in the idea that Stan being more directly related to the kids would make their bond more meaningful; Gravity Falls is a story about found families as much as (if not more than) it is about blood relatives, after all. But the math on the age difference is a little wonky (and by implication both Shermie and the twins’ parents would’ve had to have kids at a VERY young age) and the fandom has been trained to pick apart every detail for hidden secrets, so I suspect the conspiracy will never die entirely. 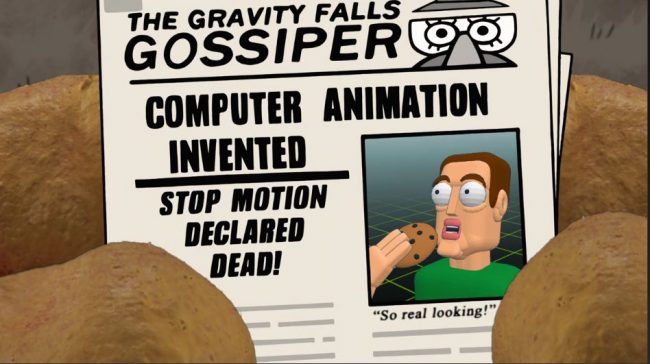 Of all the many references scattered throughout the series, the nods here to Ray Harryhausen’s stop motion mastery and Manos: The Hands of Fate (check out the Hand Witch’s robe) rank among my favorites. 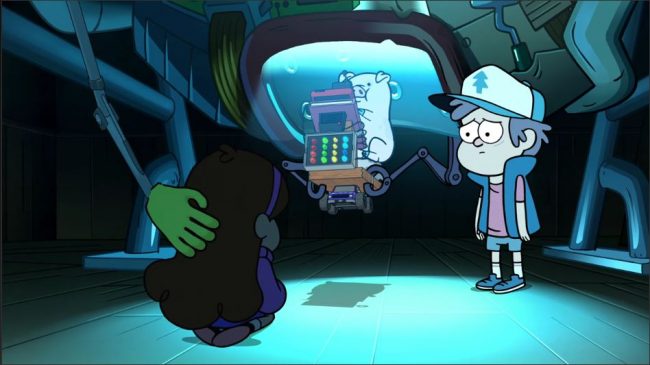 Watching this episode for the first time, the one beat that hits a potentially sour note is the ending of “Abaconings”–sure, obviously a ten-year-old would prioritize having her friend back, but is that really the best thing to do when the betterment of the entire universe is at stake, enough so that the smartest pig-being on Earth would go for it? It doesn’t necessarily make sense.

….Until you remember that it’s Stan making up all these stories. And that that one in particular is some powerful wish fulfillment for how he wishes things had gone in his relationship with Ford. To him, the element of abandonment far outweighs the lofty abstract idea of “universal good” (which in fairness to him, Ford got a lot further in almost DESTROYING the world along the way), and it no doubt became easier to sink into that stance over the years of their separation.

“If Ford had listened to me, he wouldn’t be trapped. If this hadn’t happened back then, everything would be alright now.” It seems like one of those powerfully held unconscious mentalities, the same driving force that might push him to try and keep Dipper in particular away from researching the journals and the paranormal in general.

It’s also heartrending to continue seeing these glimpses of Stan as a frustrated artist–he wanted to work in stop-motion, he clearly creates all the (sometimes pretty impressive) exhibits in the Shack himself, and even what we see of his cons have a real elaborate edge to them (he made that balloon in “The Love God” within HOURS). And while his relationship with Dipper might have an unfortunate element of toxic masculinity, he’s warm and appreciative (…in his way) of Mabel’s artistic work, as someone who probably wasn’t encouraged for his nonstandard intelligence and skills (I mean, we’ve met his dad; yikes).

Vrai is a queer author and pop culture blogger; the rewatch feels continue to be strong. You can read more essays and find out about their fiction at Fashionable Tinfoil Accessories, listen to them podcasting on Soundcloud, support their work via Patreon or PayPal, or remind them of the existence of Tweets.