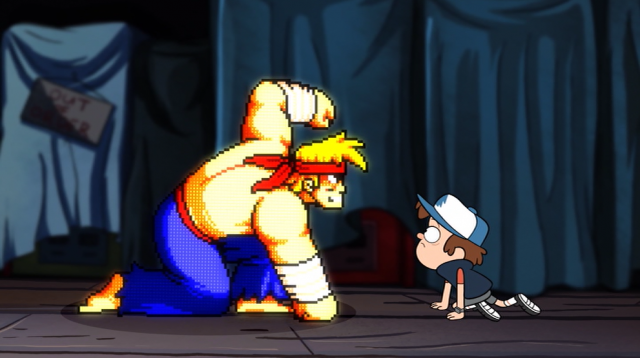 Robbie and Dipper argue over Wendy, which ends with Robbie challenging Dipper to a fight. Knowing he can’t win, Dipper hides out at the arcade and finds a code for gaining “ultimate power.” Using it, he’s able to summon Street Fight Fighter Rumble McSkirmish to be his bodyguard. Rumble quickly goes berserk, rampaging through the town in an attempt to beat Robbie to a pulp.

There’s always been something of a tug of war at play in Gravity Falls: it’s both a great ensemble character piece and a great comedy, but sometimes (particularly in the early going) these two things end up at loggerheads, and one is left with the dilemma of how okay they are with one pushing the other aside. “Fight Fighters” is almost all hits as far as its gaming homages go, packing the jokes in thick and fast and winning out as maybe the most consistently funny episode we’ve seen so far.

On the other hand, it also displays the most unpalatable handling of Dipper’s crush on Wendy (not even Wendy herself, because she’s a glorified MacGuffin here), marking the low point before the turnaround of “Boyz Crazy” (which is pretty damn perfect not just for the speech at the end but for contrasting it so pointedly with a plot about crushes literally designed to be objects) and “Into the Bunker.” The fact that Wendy not actually being around but just the idea of her speaks considerable volumes—and while things like Robbie calling Wendy out of the Shack like a dog are doubtlesslymeant to make him appear slimy, it’s still an unpleasant sit. Likewise, Dipper’s realization that he’s been “the bad guy” is welcome but more tied to getting someone else to fight his battles for him (which I’m not sure where to fit on the whole discussion of toxic masculinity the show sometimes gets into) than anything to do with Wendy herself. Also, the “hate each other in silence” payoff only works by using a setup that’s fairly counter to Mabel as a person, seeing as prior to “Irrational Treasure” she genuinely seemed to be the sort of person to let bygones be bygones.

Right, that’s the bugbear out of the way. As I said, there is a lot to like about this one. The pixel art by Paul Robertson (Scott Pilgrim,Fez) is particularly nice, rife with details like Rumble’s painfully bright color scheme leaving a slight afterimage that bleeds outside his confines, or the impressive vision of how pixels interact with the world. The boarders went all out with this one, taking the opportunity to have a lot of fun with perspective and framing in ways that aren’t just funny but also visually engrossing. And whileStreet Fighter fans will definitely get more from this one—the car joke particularly comes to mind, but there are a ton of them—the vividness of the design and a balance of great general and in-context jokes (the Soviet Union bit might be my favorite throwaway line) keep the premise from being inaccessible.

The side characters are in top form here too; excluding Robbie, who will remain insufferable until well into the second season. Mabel and Stan’s bonding experiences and ensuing rapport make up some of the show’s best little moments, and are just about the best tradeoff we can get for Dipper being caught up with crush stuff. This is also the most active Soos appearance yet, really pushing him as both an honorary member of the Pines family and a solid help during times of adventuring adversity. All this is made much more noticeable thanks to the episode’s solid balance of main and sub-plots, no doubt helped by the relative simplicity of the actual central conflict (no lore, no conspiracies, just videogame jokes and homages). 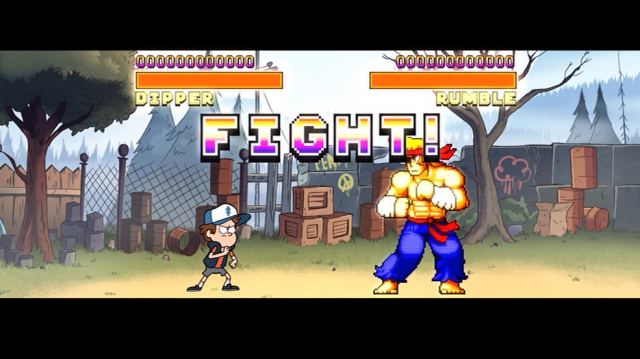 Alright, so I’m cheating a little bit here: the story I’m about to relate didn’t actually happen until 2015, maybe a quarter of the way into season 2. But it’s general enough—some minor spoilers vis a vis a certain triangle’s existence aside—that it fits just as well here (since we’re in something of a lull before the conspiracy theories really started kicking off). So, February 2015. A preacher gives a sermon on the satanic influences of Gravity Falls; nay, does not just give it but posts it on Youtube. That video then makes it to the attention of Alex Hirsch, who tweets it out to the internet at large.

In fairness (for a given definition of the word), there’s not necessarily a lot of meat here: the guy is clearly using the show as an attention grab and doesn’t actually use it as the entire basis of his sermon, and his knowledge of the show’s actual content is pretty surface level. But there’s something rite-of-passage-esque about having your paranormal/fantasy/sci-fi show be accused of corrupting America’s youth. That’s how you know you’ve really made it. 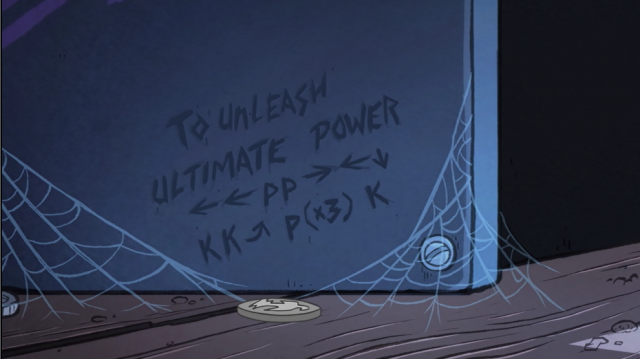 CREDITS CIPHER: Sorry Dipper, but your Wendy is in another castle

Aside of the continued prominence of triangles on various background art, there’s a whole lot of nothing this week (aside of the reference to the Konami Code with the summons for Rumble, of course). Like I said—simple premise. 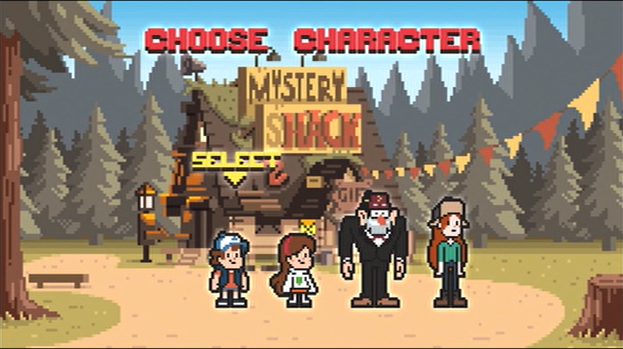 You can see Mabel Juice in the fridge when Dipper is looking for something to feed Rumble. This is in no way relevant to the plot, but it’s one of those bits of character continuity that make me ridiculously happy.

Adding onto the list of things that are an open mystery in the wake of the finale: where exactly did Stan get his fear of heights? It was quite popular to theorize, particularly in the height of the Mystery Trio craze, that his fear stemmed from side effects of the portal turning on the first time. But, well, that’s pretty thoroughly debunked at this point. Of course, it’d be very Hirsch-like to just have it be something mundane just to contrast with all the high stakes things that’ve happened in Stan’s life, but it’s a pleasant brain teaser.

Also interesting is the fact that Robbie apparently remembers all the monsters and other strange things that’ve happened up to now, meaning that the Blind Eye took some time to take action and really crack down on all this. In fact, it’s quite possible that this episode was the catalyst for that: after all, this is the first episode where a supernatural entity went rampaging through the center of town as opposed to being mostly contained out in the woods or played off as a trick. Huh. How’s that for cause and effect.

Vrai is a queer author and pop culture blogger; they were in fact a Genesis kid. You can read more essays and find out about their fiction at Fashionable Tinfoil Accessories, support their work via Patreon or PayPal, or remind them of the existence of Tweets.