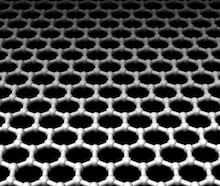 Russian-born physicists Konstantin Novoselov and Andre Geim, both faculty members at the University of Manchester, have won the 2010 Nobel Prize in Physics for their work with graphene, which is an arrangement of carbon consisting of a flat, atom-thick layer in a honeycomb-like lattice.

In 2004, Novoselov and Geim discovered a low-tech but highly effective way to produce graphene flakes: With Scotch tape. By putting tape on a piece of graphite and repeatedly peeling away, you can create a layer of graphene. Now known as the so-called “Scotch tape technique,” according to Dr. Geim, this discovery has had theoretical as well as practical implications: New Scientist reports that it wasn’t previously known that such two-dimensional sheets would be stable.

A sheet of it stretched over a coffee cup could support the weight of a truck bearing down on a pencil point.

Among its other properties, graphene is able to conduct electricity and heat better than any other known material, and it is completely transparent. Physicists say that eventually it could rival silicon as a basis for computer chips, serve as a sensitive pollution-monitoring material, improve flat screen televisions, and enable the creation of new materials and novel tests of quantum weirdness, among other things.

Novoselov’s and Geim’s Nobel victory is a historic one for them both: The 36-year-old Novoselov is the youngest physics laureate since 1973, and Geim may be the first person ever to win both a Nobel and an Ig Nobel prize. In 2000, Geim snagged the spoof award for levitating a live frog in a magnetic field.