Oh yeah, and he's also the new EIC of a mag called Heavy Metal. You may have heard of it. 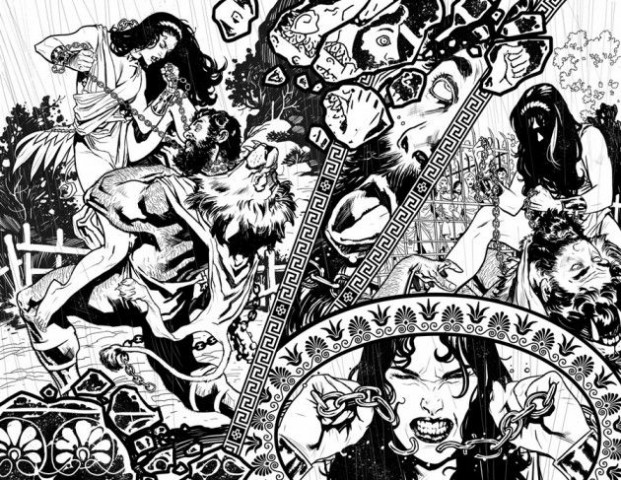 Grant Morrison is one of the most creative, brilliant, and sometimes downright kooky minds in comics. Now, he can add magazine editor to his resume, as he’s just become the new Editor in Chief over at sci-fi magazine, Heavy Metal. What’s more, he’s teamed up with artist Yanick Paquette to give us their take on Wonder Woman in the upcoming Wonder Woman: Earth One.

In an interview with Eric Diaz over at Nerdist, Morrison talked about what we can expect from Heavy Metal under his charge, and you can go to the interview to read all that if you want. But what I wanted to know was…what about Wonder Woman? Here’s what he had to say about the status of Wonder Woman: Earth One, and his take on the Amazon princess:

It’s finished now and it’ll be coming out soon. I sat down and I thought, “I don’t want to do this warrior woman thing.” I can understand why they’re doing it, I get all that, but that’s not what [Wonder Woman creator] William Marston wanted, that’s not what he wanted at all! His original concept for Wonder Woman was an answer to comics that he thought were filled with images of blood-curdling masculinity, and you see the latest shots of Gal Gadot in the costume, and it’s all sword and shield and her snarling at the camera. Marston’s Diana was a doctor, a healer, a scientist. So I went back to those roots and just built it up again.

What would a society of immortal women that’s been around for 7,000 years have done? They wouldn’t still be chopping men’s head’s off; they’ve got art and architecture and philosophy and poetry and it’s got nothing to do with men. So Yanick Paquette did this amazing design job, where there are no phallic objects. The only phallic objects are like these Greek towers that are almost like this haunting echo of the culture they came from.

Wonder Woman’s Invisible Plane is now shaped like a vagina, it’s the most incredible thing. It opens up in the back and it has a little clitoris hood, everything is a female-based design. It’s all based on shells and natural stuff. He’s created this entire newly designed world for the Amazons. And for the first 48 pages, there are no men — it’s just women talking to each other. And then halfway through the book, we’re building up to this big fight, and then I thought, “No, I’m not.” This book isn’t about fights, there’s not going to be any fights. So we threw out the rules of traditional boy’s adventure fiction. It’s the most exciting book I’ve done in years, it changed everything I’m thinking about the future.

And here’s what Morrison has to say about what he thinks motivates Diana:

I mean, you can do the Amazons as a bit strange and aloof, because they could defeat Man’s World if they felt like it, because their science is so advanced. But at the same time their culture is quite frozen, which is why Diana wants to get away and see what else is out there. But that’s how I see it. I think it’ll be quite controversial.

OMG, I can’t WAIT to read that. INVISIBLE VAGINA PLANE! However, I’m gonna have to cool my (invisible) jets until April 2016, when this book is set to drop.