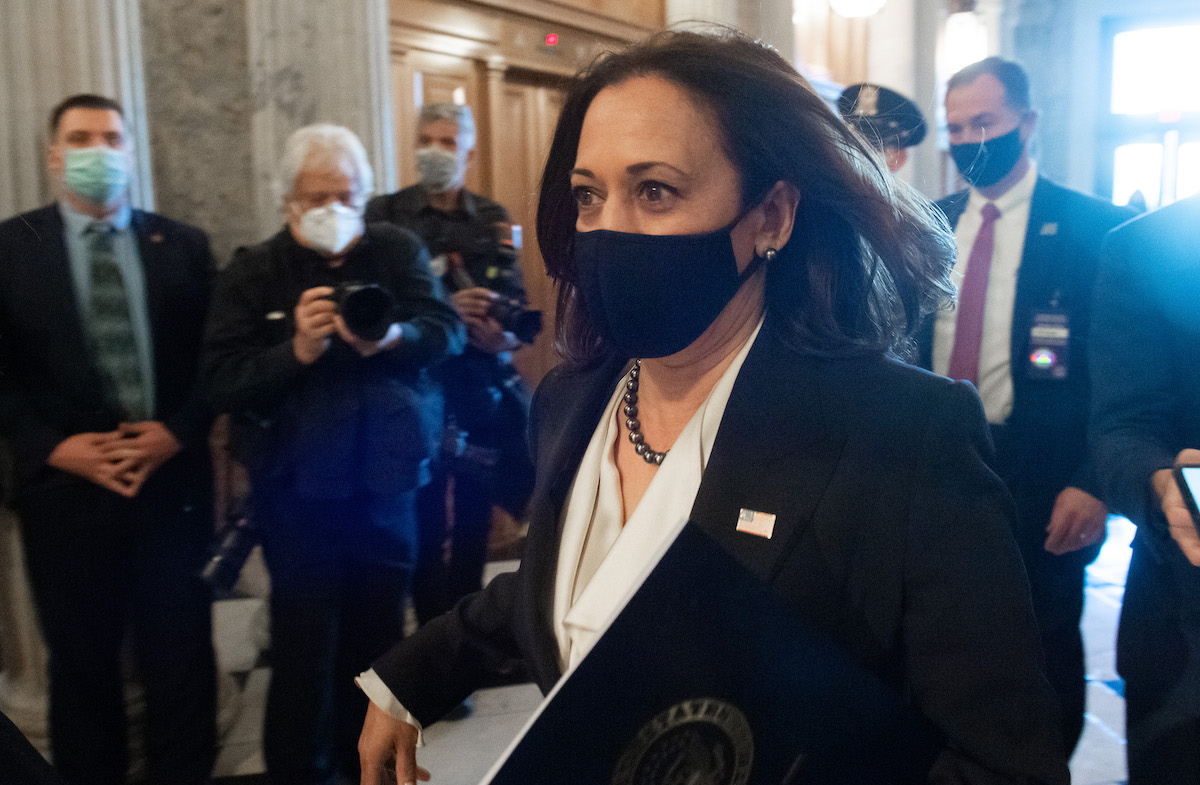 Most Republican lawmakers still refuse to publicly admit that Joe Biden won the presidential election. There are a number of reasons why they might be scared to speak out against Donald Trump—whether they feel they need his help stumping for candidates in Georgia’s runoff elections, or they think he’ll remain an influential figure after he leaves office, or maybe they think his ridiculous attempt at a coup might actually work—but the fact remains that they’re cowards who are giving credence to Trump’s conspiracy theories and his undermining of the election process, and refusing to acknowledge Biden’s clear win.

This is why it was odd that when Kamala Harris returned to the Senate this week, a lot of those same Republicans were seen congratulating her.

Harris returned to the Senate to cast her vote regarding Trump’s nominee to the Federal Reserve Board—and it’s good she did because Judy Shelton’s appointment would have been incredibly damaging. Shelton is unqualified and highly partisan and her confirmation would have given her a term through 2024.

Confirming Judy Shelton to the Fed means salting the earth for the Democratic president and increasing suffering and misery for working Americans.https://t.co/iDrSsoCuGA

Mitch McConnell trying to put Judy Shelton on the Fed during lame duck, so that she can try to tank the economy during the Biden administration, is a pretty good preview of what the next four years will look like if Dems don’t win the Georgia runoffs.

Anyway, that’s why Harris was back in in the Senate this week, where her colleagues took the opportunity to congratulate her on … things. It couldn’t have been winning the election, right? I mean Lindsey Graham, for example, has been at the forefront of the campaign to make sure Trump doesn’t concede. He has been pushing already-debunked claims of fraud in Nevada and reportedly asked Georgia’s secretary of state to throw out mail-in ballots.

So it was a little odd to see him greeting Vice President-elect Harris with a fist bump on the Senate floor.

Now, a fist bump can be congratulatory but especially in the era of COVID-19, it can also just be a normal greeting. Either way, considering what Graham has been doing to undermine this election, it’s pretty impressive that Harris could be so cordial.

But HuffPost asked Graham what he said to Harris during this exchange. He responded: “If it works out, congratulations.”

Graham wasn’t the only Republican to congratulate Harris. According to CNN’s Manu Raju, “Sens. Tim Scott, Mike Rounds, James Lankford all congratulated her, as did Ben Sasse.”

Lankford justified his comment by saying, “If someone walks right up to you, you say, ‘hello, congratulations.’”

On why he would bring that up as Rs like him haven’t acknowledged Biden won, Lankford said he was being polite. “The election is not settled. ..So if you are trying to catch it and spin it however you want to – if someone walks right up to you, you say, ‘hello, congratulations.’”

There you have it. The GOP M.O. is to deny reality and refuse to admit Trump lost but if they run into the woman who helped defeat Trump, they will congratulate her on the thing they are working hard to deny ever happened. Makes sense!