Review: Goosebumps Takes Too Long Getting Started But Is Eventually Fun 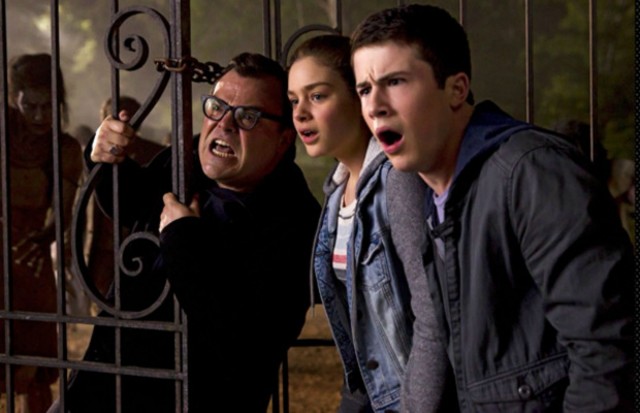 Anytime you realize there are four writers behind one movie, you should probably be a little worried. Even if you like all their work, too many cooks is definitely a concern audiences should have. That feeling is true throughout the new movie Goosebumps, based on the books by R.L. Stine, a series of scary young adult books started in the ’90s and still in print today (graphic novels included). I have a vague memory of some of these stories, but for the kids who are currently reading and loving them, I wouldn’t be surprised if they’re fans of the movie. Well, except for one problem.

Unfortunately, it takes an unbearably long time to get to the actual plot. Half this movie (probably closer to a third) is eaten up with boring (BORING) teen angst, and I can’t even image teens or preteens at this movie caring about any of it. There are familiar plots like the dead dad, new kid in school, uncool nerd, girl with an overprotective father, and neighbors developing a crush all eating up the movie’s allotted time for fun monsters, high jinx, and some pretty cool effects.

No one, even a kid with a teen crush on these teen actors, will care about their personal lives! They can go home and watch the Disney Channel or Nickelodeon for that stuff! If the characters were interesting, I might let this slide (I was happy to watch the slow start to Crimson Peak this week), but they’re not. At all. In fact, they go all the way to ANNOYING! Odeya Rush is fine as Jack Black’s daughter, but Dylan Minnette and Halston Sage are pretty hard for me to tolerate in movies in general, and this one especially. This movie is way too interested in having “cool, fun teens” rather than getting to the point of the whole thing: monsters!

Too bad, because once we get to the monsters, which have come to life from Stine’s (Jack Black’s) books, things shift into a different gear and become really fun. And considering this is a teen movie where lower budgets sometimes show, they look pretty great, and the placement of specific creatures tend to take advantage of the plot and action, so the sequences are pretty fun. Although I liked the look of most of these CGI creations, the living gnomes were my favorite, and the whole sequence is pretty funny. I don’t remember a lot of the Goosebumps stories or characters, but I do remember Night of the Living Dummy’s Slappy, so being one of the more memorable creations (and one that got sequel books) I like that they decided to make him the primary antagonist.

Speaking of which, this movie definitely can’t be called scary. There might be a few jumps for little kids, but even teens will probably just be more entertained by the action and visual spectacle than they’ll actually be scared. It’s kind of Ghostbusters-light. There are a few funny moments, nothing side-splitting. Jack Black is surprisingly muted considering he’s supposed to be the big name in the film.

Also, if he’s playing R.L. Stine (from Ohio), why is he using a phony English accent? I’d maybe understand it if this were just a phony accent when he was hiding his identity, but it’s throughout the movie. Amy Ryan does as much as she can as Minnette’s mom, but that isn’t a lot. Jillian Bell gets a few laughs as her sister, but Ken Marino seems like his part was severely cut down. The funniest cast members are probably Veep’s Timothy Simons and Ghost Girls’ Amanda Lund as the cops … who don’t last long.

As a movie for pre-teens, it’s pretty successful at hitting that sweet spot of appealing to both kids and their parents who might have read these books as teens themselves and have some sense of nostalgia. And while it does sometimes just feel like a massive advertisement for the book series, it was a much better idea to do this mash-up action comedy and make a big, silly, bombastic movie, rather than an anthology film of several Goosebumps stories, like Twilight Zone or the VHS movies. It looks great, the creature design is smart and effective, and once the movie really gets started, there is definitely a sense of being taken for a ride.

I just wish they’d figured out that they needed to start the action early and have the kids more like the Scooby gang, and get into the sheer fun of the whole premise, rather than talk about school dances and dead fathers. That could have allowed the characters to propel the movie and audiences forward, rather than constantly holding it back.