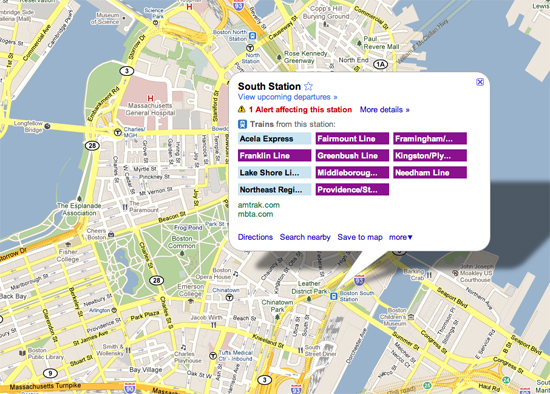 Public transit is great, but it can be nervewracking not knowing when your bus or train is going to arrive. To help alleviate that sinking feeling you get at the bus stop in a strange neighborhood at 2 AM when it seems like your bus will never come, Google is now bringing live transit updates and delay notifications to Google Maps and their mobile Android App.

So far, the service is only available in six cities that have partnered with Google: Boston, Portland, San Diego, San Francisco, Madrid, and Turin. On maps of these areas, users can click or top on the icons for public transit stations. A window will pop up listing the lines, estimated arrival times, and any service alerts that might affect the station. Google plans on adding the transit information of more cities in the future, but hasn’t given any word on how quickly other cities will rollout nor what cities will be involved.

While certainly useful in its desktop form, the app seems even more valuable on a mobile platform. Coupled with their recent addition of traffic jam avoidance technology, Google is bringing a huge amount of transit data it has access to bear on its Android platform. While Android’s open architecture has always been a major selling point, it’s useful apps like this that take advantage of Google’s efforts to organize the world’s information that could give it an even greater competitive edge.