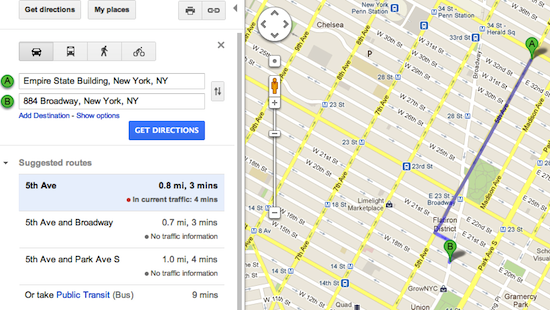 Back in the day, Google Maps could give you a rough estimate of how long your journey from point A to point B would take depending on the traffic in the area. Last summer, that capability disappeared because of dissatisfaction with the methodology it used. However, the feature has now returned, and it’s partly thanks to crowd-sourced data from Android users.

“We have decided that our information systems behind this feature were not as good as they could be. Therefore, we have taken this offline and are currently working to come up with a better, more accurate solution,”

Though the feature was pulled from the site, it persisted in the mobile version of Google Maps on Android and iOS. This past Thursday, Google announced that the feature would return to Google Maps, though it remained mum on what exactly had changed. From the Google Lat Long Blog:

Now using both live and historic traffic data, Google Maps enables you to once again see the estimated length of time your journey might take. In areas where the information is available, this new and improved feature evaluates current traffic conditions and is constantly being refreshed to provide you with the most accurate, up-to-date estimate possible.

At least some of that historic traffic data was coming from Android users, from whom Google has been pulling anonymous information about their speed and location for nearly three years. From the Google blog post announcing the traffic information initiative, all the way back in 2009:

When you choose to enable Google Maps with My Location, your phone sends anonymous bits of data back to Google describing how fast you’re moving. When we combine your speed with the speed of other phones on the road, across thousands of phones moving around a city at any given time, we can get a pretty good picture of live traffic conditions. We continuously combine this data and send it back to you for free in the Google Maps traffic layers.

For users eager to try out the new capability, simply look up driving directions as you would normally. If there is traffic information available in your area, then a small note will appear below the directions indicating the traffic conditions and estimated time. This feature, however improved, is still highly localized. For instance, in the directions above, you can see that Google says it has no traffic information for routes that only vary slightly from the first presented.

While the utility of the service is currently far from universal, it will almost certainly get better. In their announcement, Google encourages those people without traffic information in their area to activate the information gathering capabilities in their phone.