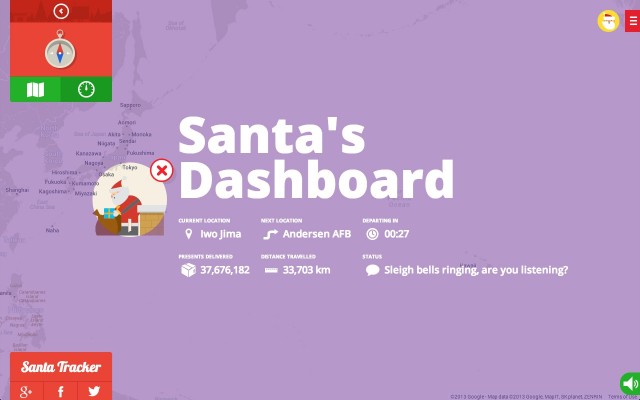 It’s Christmas Eve, which means “Santa” is “delivering presents” all over the world. *wink* Where’s the big man now, and more importantly when’s he showing up with your stuff? Google’s Santa Tracker will let you know when to expect him, and more silly details.

The web version of Santa’s Dashboard (pictured above) shows you where Santa is currently delivering toys, where he’s off to next and how soon, how many presents he’s delivered, and even how far he’s traveled. Santa’s also updating his status along the way, because he’s reckless and doesn’t care about texting-while-driving laws. Naughty list, Santa. You’re on the naughty list now.

Besides stalking Santa, there’s a lot more to do with the tracker. You can play some games, or have Santa leave your friends a customized message as long as you’re “a big kid.” 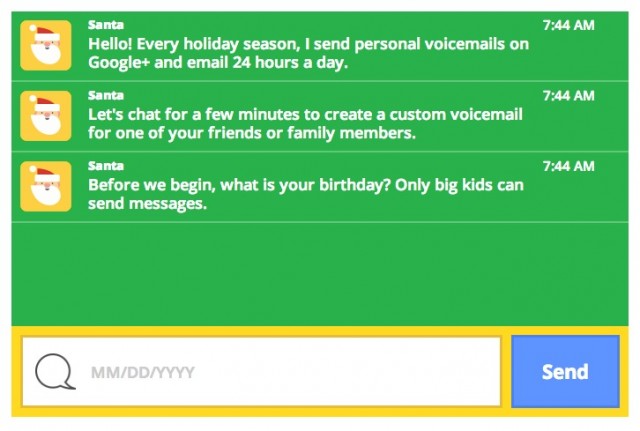 Here’s one I just put together for Associate Editor, “little helper”, and “circle buddy” Dan Van Winkle. You have a few options of how to send the message, but it seems like Google isn’t going with the once-popular option of having a robot call your friend’s cellphone. Probably because no one wants that to happen ever. Also, we have no idea what a “circle buddy” is.

The Android app gives you fewer options for both games and ways to harass your friends, and is kind of a disappointment compared to the web version. It still seems like something fun for kids while they wait in sugar-fueled anticipation for presents. And we’d certainly rather see Google taking a break from its duties to track Santa than have NORAD do it.