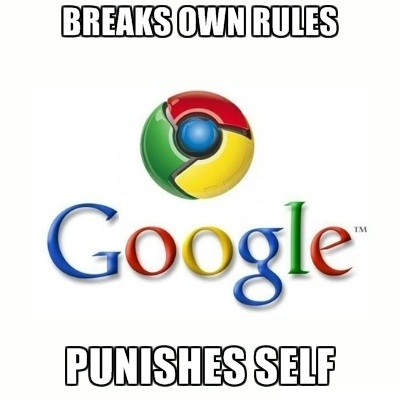 Just the other day, some intrepid bloggers turned up several instances of Google breaking it’s own paid link policy by indexing paid links pointing to the official “Download Google Chrome” page. It was revealed to be a technical mistake on a blogger’s part, caused when said blogger forgot to throw in a nofollow tag. Nonetheless, Google had broken its own rules and has always been strict about dishing out punishment. That being the case, Google has punished itself, ranking the offending, sponsored-content blogpost as “untrustworthy” and reducing the Download Google Chrome page’s PageRank for 60 days, knocking it off the first few pages of results.

This particular move, while not entirely unexpected, is pretty respectable since there’s been a conventional marketing push for Chrome recently, and the reduced PageRank sure isn’t going to help that push be effective. For the moment, the first link returned when you search “Download Google Chrome” actually takes you to a support page with a link to a download page across the top bar. If you want Chrome and you know anything about computers, you’ll be able to find it. Still, it’s going to affect some people.

While Google did address the paid link violation, it hasn’t seemed to address the allegations that the sponsored content that contained the link was “thin content,” the likes of which Google has traditionally eschewed. In any event, I think they deserve some credit for burying the Chrome page and not cutting themselves any slack. Granted, they can always just throw a link to the page in their little sponsored links box, but from what I’ve seen, they aren’t even doing that. What they may lose in potential new –and probably less informed– Chrome users, they’ll make up in loyalty from their current ones. Theoretically at least. I mean, it worked on me.