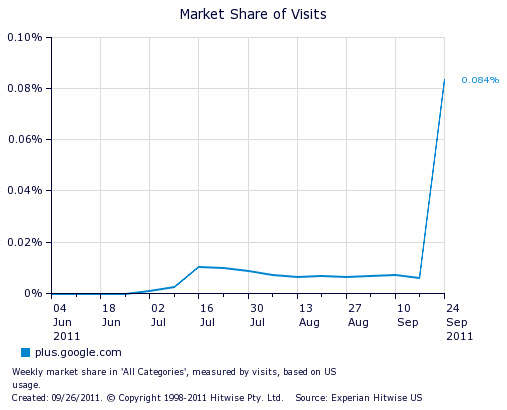 When the closed beta of Google Plus first launched, everyone was stoked about the service, testing out Hangouts with coworkers sitting across the table, and posting about how awesome it was to be included in the limited Google Plus beta. After the initial rush, activity died down, leading to various blogs calling Google Plus a ghost town. Last week, the fledgling social network opened to everyone, allowing anyone to join without requiring a precious invite. As one would expect, this caused a spike in Google Plus traffic. As one may not have expected, however, the spike in traffic represented a staggering 1,269 percent growth.

Data from intelligence service Experian Hitwise shows that last week, Google Plus received 15 million visits, up from 1.1 million visits the week before, climbing from ranking 54th in Hitwise’s “Social Networking and Forums” category to 8th. Interestingly, the numbers don’t account for mobile visits, or even visits from Google’s black bar. A post on Google Plus by Paul Allen puts the social network’s user base at around 43 million users, which isn’t too shabby for a fledgling social network that has to deal with the likes of Facebook and continual criticisms that once one signs up for the service, there isn’t much to do after that.