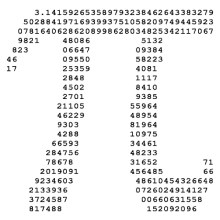 The last vestiges of telecommunications company Nortel were sold off in an auction this week, encompassing some 6,000 patents and patent applications for various technologies. Several big name tech companies were involved in the marathon 4-day bidding process, but Google turned some heads with its unusual bidding strategy.

They began with an initial $900 million “stalking horse” bid, which they upped to $1,902,160,540 and then to $2,614,972,128 and finally $3.14159 billion. Normally, bidders opt for rounder numbers, but the mathematically inclined quickly identified a pattern in Google’s bids. Their opening shot was Brun’s constant, followed by Meissel-Mertens constant, and finally pi. Reuters quotes a source commenting on Google’s bidding, saying “either they were supremely confident or they were bored.”

Sadly, their whimsically mathematical bids weren’t enough to carry the day. The final price for the patent materials was $4.5 billion, purchased by a coalition of companies comprised of Apple, EMC, Ericsson, Microsoft, RIM, and Sony.