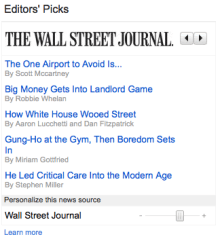 Everyone’s favorite algorithm-centric, humanless Internet news delivery service, Google News, is becoming a little less humanless. Yesterday, Google introduced a new section in the right-hand column of the U.S. version of Google News, dubbed “Editors’ Picks.” The new section displays content that editors from various sites handpick to be shown on Google News. In Google’s official announcement post, they reiterate a few times that the new section is picked by humans rather than chosen by algorithm, so they probably want that to be known.

The new section works by publications creating a separate RSS feed, then regularly updating the feed with new stories that the editor wishes to highlight from their site. A publication must a somewhat strict set of rules in order to even be considered, which can be read over on Google’s FAQ. The feeds shown to the readers are chosen, as Google mysteriously says, “based on a variety of factors,” but also includes a reader’s news preferences.

The Editors’ Picks section wasn’t making its first appearance yesterday, as it was released in an experimental phase last year.