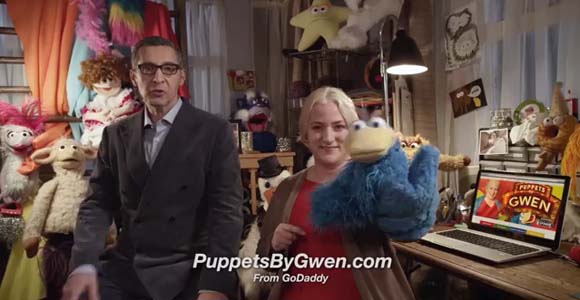 Full disclosure: I didn’t watch the Super Bowl. That being said, I am doing a bit of catching up on the commercials to spin out of it. You might be familiar with web hosting company GoDaddy’s usual approach to marketing. Turns out, they decided to go in a different direction this year. And it’s surprisingly positive.

Meet Gwen Dean. Up until yesterday, she held a job as a machinist in New York. She used a Super Bowl commercial to quit with help from her puppet, Mr. Frank.

Talk about going out with a bang. Though quitting a job via video isn’t new, and we suspect Go Daddy might have gotten the idea from this viral video of a woman quitting her job while dancing to Kanye West. Regardless of how the idea came about, it was a fun idea which had a great story behind it. Here’s the commercial that aired:

Dean worked as an operations engineer at a refrigeration factory for eighteen years. She’d been building puppets in her spare time for a while but finally decided to make the jump and start her own business. Pando.com says Dean was “chosen from a shortlist of 100 people following a two-month selection process.” And if you think it was a harsh way to quit, don’t worry, Dean also put in her official notice to her boss via email just after the commercial aired. Dean told Today he took it very well and laughed about the big show of it all. She got a text message from him which read: “You’ve got to be kidding. Wow. Great commercial.”

According to her website, which you should definitely take a look at since that’s probably why she agreed to the whole thing, she’s very passionate about her new venture:

Trading the field of engineering for the enchanting world of puppetry was an easy decision for me. ​Yes, I may have manufactured a whopping 65 million gallons of chilled water over my 18-year career operating large tonnage refrigeration machinery. ​But…it’s puppets and their interaction with children that have been my real love since childhood. From the days of my father animating my favorite teddy bear to the fun-filled magic of my puppet shows today, infectious laughter and energetic conversations between children and puppets are pure passion for me.

The “I Quit” spot wasn’t the only Go Daddy Super Bowl commercial. They also featured a CG assisted Danica Patrick as one of many body builders headed to a tanning salon owned by a woman.

What did you think of these commercials? I think The Mary Sue staff is in agreement: women in engineering rock, puppets rock, women who quit engineering to work with puppets rock. Get a little more info on Dean and her business in this extended clip.