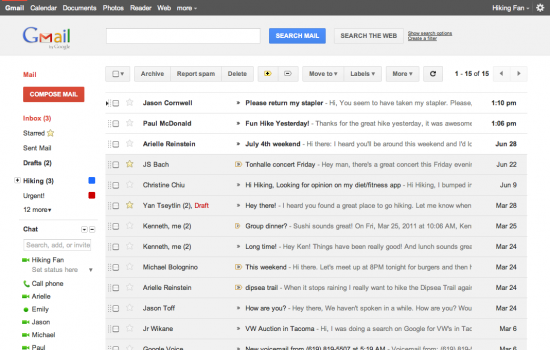 Though it might be a surprise to some, Gmail hasn’t always been the juggernaut it currently is. In fact, the email service wasn’t even the largest email provider in the world until very recently. Though the search engine giant had claimed the title for itself this past summer, third-party data didn’t back up the company’s assertion until just now. comScore’s set of email data for October shows Gmail finally toppling the reign of Hotmail. A second takeaway from this is that people still use Hotmail for some reason.

According to the comScore data, which is presented in a gorgeous graph over at GigaOM, Gmail had 287,913,000 worldwide active users during October compared to Hotmail’s 286,238,000. Overall, the numbers are down for all three major email providers, with Yahoo! trailing in third, but this is the first time Gmail’s actually been top dog. That’s a difference of 1,675,000 between the two leaders, which is a rather insignificant amount considering the vast number of users we’re talking about here. To put things in perspective, that number is just over half a percent of Gmail’s total for October.

Strangely enough, it’s not Gmail nor Hotmail with the most users in the United States, though. That honor goes to Yahoo! Mail, with 76,751,000 active users during October compared to Gmail’s 69,124,000 and Hotmail’s measly 35,516,000. Perhaps Americans just prefer email providers with an exclamation mark in their name, or maybe they like the fact that the service is two words rather than some amalgamation. Much like how many licks it takes to get to the Tootsie Roll center of a Tootsie Pop, the world may never know.