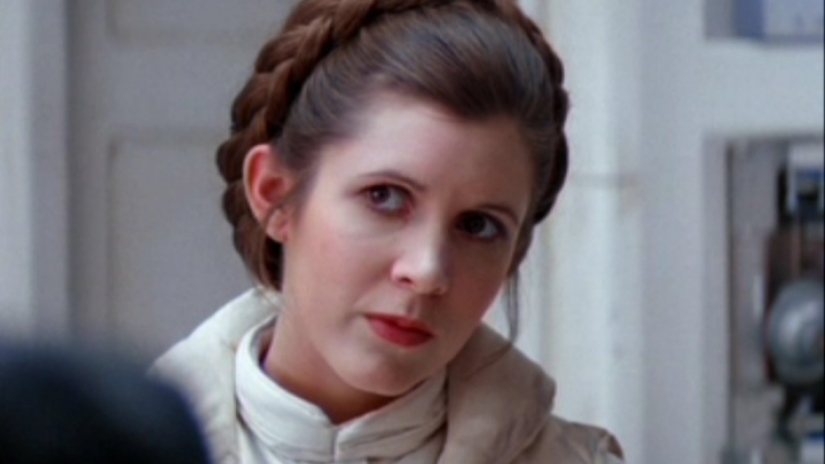 A Tumblr post that has gone viral on Imgur tells the story that probably rings familiar for many fans who have waited in line for a meet & greet or an autograph. Apparently, Fisher was known for especially long wait times, because she liked to decorate her fans with glitter.

In the post, user UnRepentantDrew recalls meeting her backstage at DragonCon. “She shook my hand and looked intently at my face. Then she pulled out a make-up case and a brush and started brushing something on to the left side of my face. I looked at Fritz, her escort, and he said, ‘She’s been doing this all day.’ Carrie grabbed my chin and turned my face back to her. She then finished COVERING the left side of my face with glitter, cocked her head to take a more critical view of her work, nodded, and went on to her next appearance. She never spoke to me the entire time but beeped my nose as she walked away.”

For the rest of the day, “I kept running into other people on the crew that day who had glitter dust on their faces. Everyone just smiled and said, ‘Oh, you ran in to Carrie, too.'”

Other users responded with stories of their own, of meeting Fisher and being “baptized” by her glitter. One person on Twitter said it felt “like being knighted.” Over the years, fans have been gracious enough to document and share their these encounters.

Anna Kendrick shared her own story of a Carrie Fisher glitter bomb.

Carrie Fisher wore glitter in her hair. When I said I liked it, she ran her fingers through it and lobbed a handful at me. #TheGreatest 💔 pic.twitter.com/T7NWGdJp8w

Another user responded to that Tumblr post with a story Fisher told in one of her books, of how “her therapist … always knew she was having an ‘off’ time in her head depending on how much glitter she’d show up wearing to appointments. It was her way of making the world sparkle and shine even when it felt dark. It made her feel better. Evidently, she wanted to share that with others.”

Carrie Fisher did so much to bring light to mental health awareness, she didn’t hide her illness and was’t afraid to discuss it. pic.twitter.com/OoOKYzJqzc

Thank you for bringing us all a step closer to stigma-free mental health. Your work lives on Carrie Fisher.❤ pic.twitter.com/nNpIHDYf6G

So if you want to honor Carrie Fisher and mental health advocacy, throw on a little #GlitterForCarrie. (Just please remember to keep it out of your eyes. And maybe take a second to read those labels for toxicity warnings. Stay safe. Stay sparkly.)