Why Glee Has No Home at the Emmys 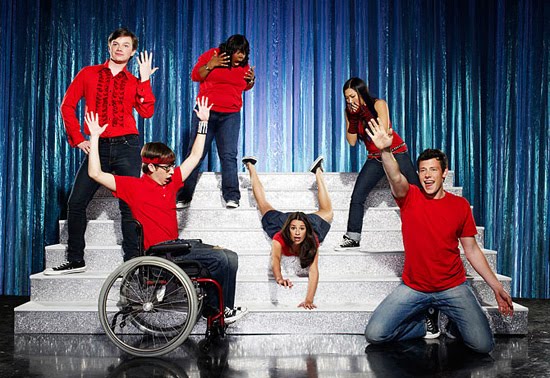 At the Golden Globes, Glee fit snugly into the musical/comedy category of television programming. And then it won that category. But for the Emmys, things aren’t so simple, reports Entertainment Weekly. Apparently, some people are questioning the validity of the claim that Glee is a comedy.

“We bust our asses trying to get as many laughs into the shows as possible,” gripes one veteran scribe. “Dramedies don’t do that.” Adds another: “I’ve seen Glee a couple times, and I like it okay. But it has never, not even once, made me laugh, which seems like something any comedy should do.” Still, that writer points out, “I don’t know that a show like Glee should be competing against, say, The Wire, either.”

Glee really isn’t strictly a comedy, and it certainly isn’t a drama either. And the musical numbers take on their own life altogether, not always contributing to either side of that spectrum. So we’re left with a show that’s 1/3 comedy, 1/3 drama, and 1/3 musical. This means that there is no category at the Emmys which the majority of Glee can claim to belong to. This is a problem, and the show may suffer for it.

We expect the winner of the Best Comedy Series category to be the funniest. That’s just how we rank comedies, and for good reason. But Glee is not going to be the funniest, no matter who it’s up against. Glee has funny moments, but it’s not a perpetual laugh machine, or even close. A lot of the series is very dark, and the show can go for scenes and scenes without ever even intending to be humorous.

We expect the winner of the Best Drama Series category to be the most compelling, thoughtful, and well acted series of the year, and Glee is too goofy to match the competition. Glee would be the literal laughingstock of the category; it just doesn’t belong there. The things that make Glee great are not the things that make all the other series that show up in this category great.

Now they’re not going to make a new dramedy category, and they shouldn’t. The lines are still blurry, and it’s unclear what exactly would go in the new category. Personally, I think it would be a good place for some of the quirkier, crime dramedies like Castle and White Collar, both of which suffer a minor case of Glee syndrome in that they don’t clearly fit any currently existing categories.

So Glee will end up nominated for Best Comedy Series, and I honestly don’t know if it will win. It’s going to be a powerful category, as it always is. But if Glee does win, it changes how we have to look at what that specific award means. Well, sort of. The award has always gone, in theory, to the best series of the bunch, which has also always, in theory, been the funniest. Glee could just be the first show to win the best comedy series without actually being the funniest.