Girls Who Code Will Expand To Train 1,200 Girls In Computer Science This Summer 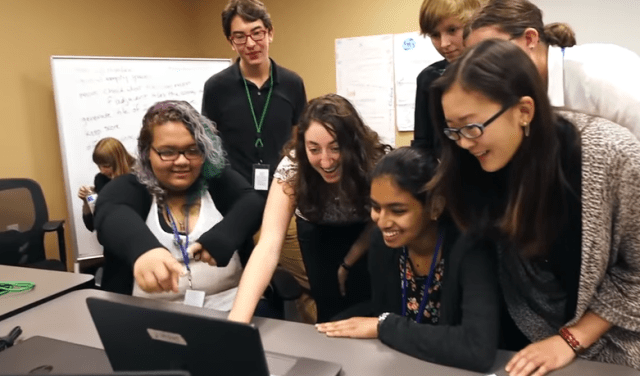 Last summer, Girls Who Code taught 19 immersive, high-quality computer science programs for 375 girls across the country. But that’s not enough for a national nonprofit organization committed to bridging the gender gap in the tech industry, and today they’ve announced a major expansion for their summer 2015 programs—and if you’re the right age to attend one of these awesome classes, you’ll get your chance to apply very soon!

According to their latest press release, Girls Who Code will triple its reach in 2015 with 60 different summer programs for 10th and 11th grade girls, and will expand to add Austin, Chicago, Los Angeles, and Washington D.C. to its list of current locations, which also includes Boston, Miami, New York City, Seattle, and the San Francisco Bay Area. These seven-week intensive training courses teach girls skills in computer science, robotics, web design, algorithms, and mobile development, and give them the opportunity to visit technology companies and startups via field trips over the course of the program.

“The gender gap isn’t just a Silicon Valley issue anymore,” founder and CEO Reshma Saujani, who recently moderated a panel on the portrayal of women in STEM for the Paley Center last week, said in the press release. “The shortage of women in technical roles, whether it’s retail or entertainment, is a massive crisis both in terms of innovation and socioeconomic equality throughout the United States. Girls Who Code has established a successful track record of empowering girls to pursue majors and careers in computer science, and we’re inspired that so many diverse companies have invested in taking our movement to the next level this year.”

Launched in 2012, Girls Who Code seeks to reverse the declining rate of women in technical fields and achieve gender parity by encouraging girls to become interested in computer science and engineering. This year, two New York-based Girls Who Code students made waves when they uploaded their final project, a game called Tampon Run, to the Internet. The nonprofit also recently engaged in a partnership with CoverGirl to create a video advertisement for part of the magazine’s #GirlsCan campaign.

Currently there’s an interest form on the Girls Who Code website for anyone who’s interested in volunteering or learning more, and an official application form for the summer classes will also soon be available in January of 2015. No previous coding experience is necessary to apply to one of the immersive summer classes, and the program is free to all applicants.

(via Techcrunch, featured image via the above video)