In India, a Young Girl Was Found Living With Monkeys

Making headlines worldwide is the disclosure by a hospital in Uttar Pradesh that they are rehabilitating a girl who has been with them for two months—ever since woodcutters found her in the forest, naked and surrounded by monkeys.

Stories of “feral children” raised by animals are well-known in fiction and have been recorded throughout history, but with the advent of the modern media, international fascination with this case is huge. In the video above—one of many online—we see the girl, thought to be 10-12 years old, lying in her bed. Around her is the flash of cameras and the murmur of crowds. As the Washington Post reports, the Indian press has taken to comparing her to Mowgli, the Indian feral child character in Rudyard Kipling’s “The Jungle Book.”

When she was discovered, the girl appeared emaciated and “had wounds all over her body,” leading police and doctors to speculate that she could have been raised since infancy by the primates—she was groomed just like a monkey. When the police removed her from the forest, monkeys chased the car, after trying to protect her as one of them. Even after the past few months at the hospital, she displays “an aversion to human interaction.” The chief medical superintendent overseeing her hospital, D.K. Singh, told the press:

“The way she moved, even her eating habits were like that of an animal. She would throw food on the ground and eat it directly with her mouth, without lifting it with her hands. She used to move around using only her elbows and her knees. … She behaves like an ape and screams loudly if doctors try to reach out to her.”

The situation does not seem completely hopeless, however. Her condition is improving, and “she has begun to walk normally by herself and eat food with her own hands.” While she still does not speak, she gestures with the staff in order to communicate. And there are past examples that suggest she might one day be able to integrate with human surroundings, although many cases do not fully “recover” from their experience. 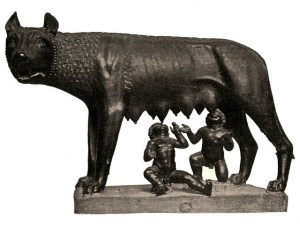 Romulus and Remus with the Capitoline She-Wolf (image: Wikipedia)

“Feral children” have a fascinating place both in reality and a longstanding tradition in folklore. Think about all the mythical heroes who were nursed by kindly wolves, goats, bears, and primates. Throughout recorded history, feral children have been found and brought back into society, with varying degrees of success.

The Post quotes the anthropologist Mary Ann Ochota, who has studied the phenomenon, and emphasizes that the real-life children are not subject to the magic of myth and fairytale. It’s often, unfortunately, very much the opposite. “These aren’t Jungle Book stories, they’re often harrowing cases of neglect and abuse,” Ochota observed. “And it’s all too likely because of a tragic combination of addiction, domestic violence and poverty. These are kids who fell through the cracks, who were forgotten, or ignored, or hidden.”

While the police are attempting to investigate the girl’s origins, it’s possible that her personal history will not be uncovered. It’s hard not to feel like she’s being made a spectacle of, considering the wall-to-wall press and videos where she’s surrounded by curious observers, but my hope is that all of this attention will lead to long-term interest and dedicated treatment.