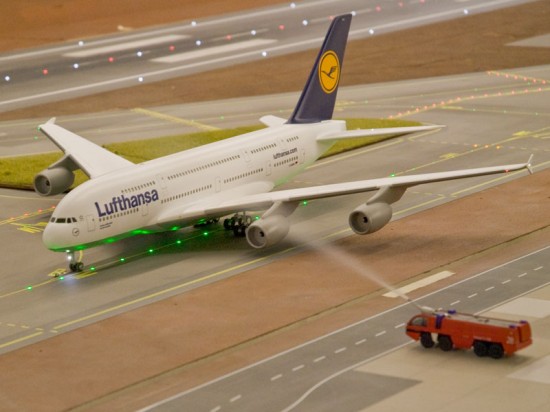 After six years of work and $5 million in costs, the world’s largest model railway now has a fully-functional airport. Hamburg’s Miniatur Wunderland, one of Germany’s most popular attractions (which might say something about the German psyche), already boasted a model railway that housed over 200,000 tiny inhabitants and over 6 miles of track. Now, the miniature town of Knuffingen has an airport, complete with computer-controlled planes taking off and landing.

At the Wunderland, visitors can watch the tiny goings on in various German and Scandanavian citites and towns, as well as some American locales as well. Each set is alive with the activity of trains, cars, and emergency vehicles that deal with periodic “disasters.” There is even a model of Hamburg itself, and I sincerely hope a tiny model of the model inside the model leading to infinite regression and the end of Universe.

More pictures can be found here, but read on after the break for a video of the Knuffingen model airport from a few months prior to its completion. Though not finished, the level of complexity in the video is still staggering.

(via Gawker, image via Miniatur Wunderland)