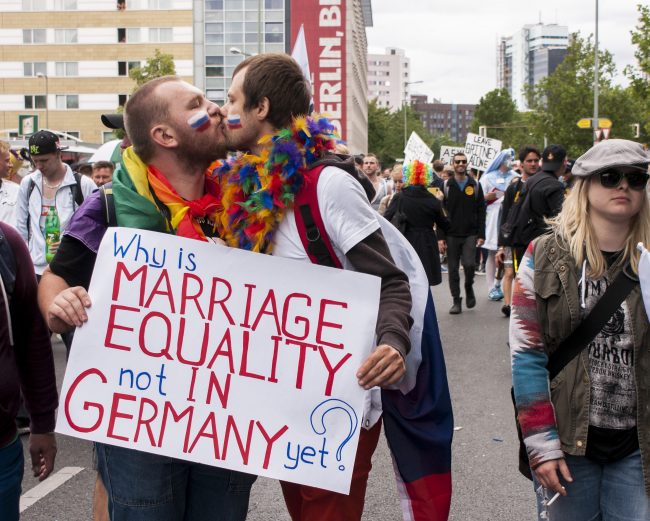 Germany has for many years been out of step with other EU nations in not recognizing the legal right of same-sex couples to marry. Love wins once again, however, and Friday’s parliamentary vote made same-sex marriage the law of the land.

It might surprise some casual Germany watchers that the country, often thought of as forward-thinking and generous on issues like welcoming refugees, was lacking same-sex marriage. Marriage equality has long been accorded to populations in many Western European countries, with the Netherlands and Belgium leading the charge. Spain and France have followed suit.

But cities like the uber-liberal Berlin, where most tourists soak up a German experience, are hardly representative of the nation of a whole—no more so than New York City speaks for the rest of America. Germany’s leading political party, the Christian Democratic Union, has been more stalwart in espousing “traditional” values, though same-sex civil unions were legalized in 2001. Those partnerships did not accord the same rights as marriage, so this is a huge step forward. 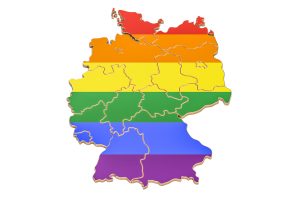 Germany is a major EU power player and is headed by a woman, Angela Merkel, that articles have anointed the new “leader of the free world” in the wake of Donald Trump’s defection from the role. Much of the resistance to marriage equality was supported by Merkel and her CDU party, who opposed the measure for years. Merkel, the daughter of a Protestant minister, has in the past stated, “For me, personally, marriage is a man and a woman living together,” and she repeated similar sentiments on Friday. She also voted against same-sex marriage in the parliamentary vote.

But Merkel is more than anything a savvy politician who knows which way the wind is blowing, and European conservatives are often of a wildly different cut than their American counterparts. It’s Merkel who paved the way for Friday’s landmark vote, knowing that the German parliament was overwhelmingly in favor of equality—in line with the public’s growing support of the matter.

It was a smart move that allowed her to retain her stance while permitting Germany to catch up with the rest of the modern world. While I might strongly disagree with Merkel’s personal conviction, I can admire her tactics and decision not to fight tooth and nail to block progress because of her own views. The Washington Post reported:

By allowing the law to pass before the elections despite opposing it, Merkel appealed to the majority of voters but might have avoided the anger of much of her party — following Merkel’s long-standing rationale of trying to make the least enemies whenever possible. “I hope that with today’s vote not only that mutual respect is there between the individual positions, but also that a piece of social peace and togetherness could be created,” Merkel said after the Friday vote.

Despite the bumps in the road to getting there, love won today in Germany, and it did so to the sound of raucous applause and under a rain of confetti. Ehe für alle!