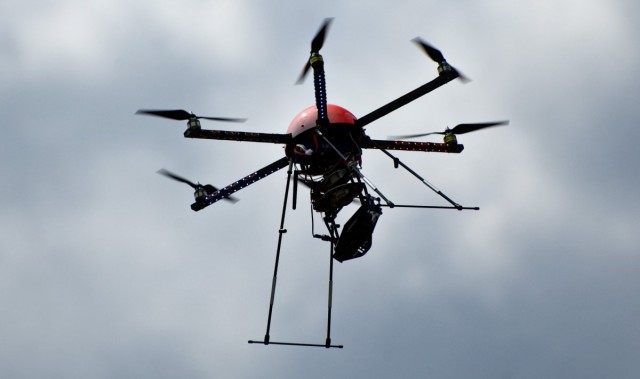 Germany is a country that takes its privacy very seriously. Google has had a number of problems with German privacy laws in the past, which is why it’s surprising to see that the country’s national rail system is considering using surveillance drones to stop people from vandalizing railway stations. When I say, “stop people,” they’ll just be gathering evidence as a preventative measure, not firing missiles at vandals or anything like that. At least not yet.

The national railway company Deutsche Bahn will test small drones at railway stations. They’ll be armed with infrared cameras, and hover in near-silence almost 500 feet off the ground. It seems the plan is more about preventing vandals because they’ll know they’re being watched than it is about catching them, but the evidence from the cameras will be turned over to authorities.

According to the BBC, graffiti costs Deutsche Bahn $10 million every year, so installing a few drones that only cost around $77,500 dollars each is probably a tempting option. The privacy concerns could still be an issue, but Deutsche Bahn says that the camera will only be recording areas of their own property. Anyone not wanting to be filmed can simply not sneak into the depot at night to spray paint trains.

Deutsche Bahn seems happy with their solution to the privacy concerns, but considering how much trouble Google has had dealing with the country’s privacy laws, I’m not convinced it’s going to be that easy. I’d also be interested to see what the penalty for vandalism is as it compares to the penalty for shooting down a surveillance drone so you don’t get caught and charged with vandalism.