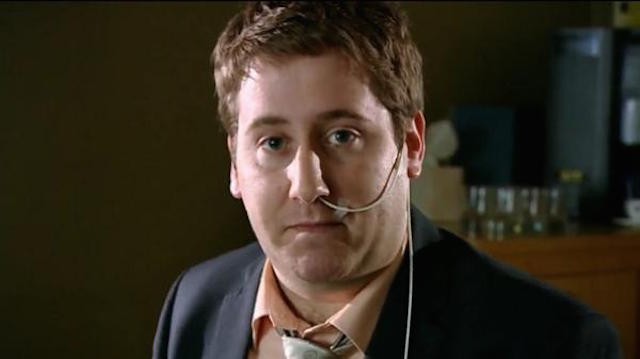 Disclaimer: I don’t normally find terminal illness funny. Despite what you may think if you clock me before midday, I’m not a monster. I don’t drink the blood of tiny woodland creatures, I don’t tell kids that Santa’s not real, and I definitely don’t find death-by-flu-complications hilarious.

With one exception. Peep Show is my favorite TV program, and when the show’s ailing dork died from flu, my love for the sitcom tripled. I’m fully aware of how evil that sounds. As someone with a chronic illness, I know that it’s cruel to poke fun at a body that’s already taken some punches. Why then, does Gerard’s fatal flu crack me up?

Well, when I’m poorly, I get empathy, encouragement and a whole lotta lovin’ from family and friends. The bottom line is, when it comes to combating my illness, I have the best crack squad. I couldn’t have planned it better if I’d diseased myself. However, I know that in order to avoid full dependency, I myself need to change how I perceive my illness.

Somehow, I must see the lighter side of being chronically ill. Although I’m definitely (maybe?) a lot cooler than Gerard, I see my experiences reflected in his character. From waltzing about with a tube up his nose to bringing a litre bottle of water to a party (“stomach acid levels are playing up”), Gerard’s dealings with illness mirror some of my own. When I was 17, I had a feeding tube because my wayward digestive system refused food. Much like my appetite, any chance of awkward teenage flirtations diminished. This was frustrating, but time, and a little bit of Peep Show, have taken the edge off. “She’s not going to want to kiss around the mucus duct,” Mark (Gerard’s romantic rival) sniggers. I have a laugh at Gerard’s expense, and I have a giggle at my 17-year-old self, too. It’s an odd set-up, but one where I can reject feeling hard done by. Instead, I can crack a nostalgic smile.

My smile widens as I reminisce about “accessorizing” my bright yellow tube by tying the end up in my ponytail. I full-on cackle when I remember spontaneously vomiting curry over my mum. When I’m sniveling under my duvet fort, hot water bottle clamped to my belly, that helps immensely.

As of yet, I’ve struggled to find anything as soothing the The Gerard Parallel on TV. From Holby City to Grey’s Anatomy, portrayals of chronic illness have never provided much of a coping mechanism. People with long-term diseases often a: are used as personal growth vehicles for healthy people (especially in hospital dramas—looking at you, Holby!) or b: have short-lived, superficial storylines.

Conversely, Gerard’s illness is a recurrent subplot throughout Peep Show’s series. Gerard isn’t used for the development of healthier (tubeless) characters; he’s the focus of some briliant jokes.  One of those (and in my opinion, one of Peep Show’s finest moments) is when Gerard finally croaks. Co-writer Sam Bain commented, “We thought the wildest place we could go was to the grave.” It certainly was—when Dobby (Gerard’s friend) announces Gerard’s death, there’s no sobering effect. Hilarity ensues. “He had a weak immune system,” Dobby explains, tearfully. “He had a weak everything, to be fair,” is the response she gets. In true Peep Show style, any grief is offset by wonderful, irreverent humour.

This piece is already of Kanye-level self-indulgence, so I’m going to proceed and throwback to myself again. Life with my condition means a lot of scary, serious moments. You don’t see these on Peep Show, but when Gerard dies, the gravity comes all at once. So, I’m going to undercut my “moments” with Peep Show reruns, whittling the larger struggles down to digestible chunks. And with my dodgy tum, digestible chunks are a must. It’s either that, or the yellow tube again.

Wedaeli is a freelance writer. She started scribbling away in boxy university digs, and now has bylines in publications like The Guardian, The Huffington Post and the F-Word. Her specialties include popular culture and identity politics. When not glued to her laptop, she’s reading, swimming and ultimately, thinking about her laptop. Follow her on Twitter.