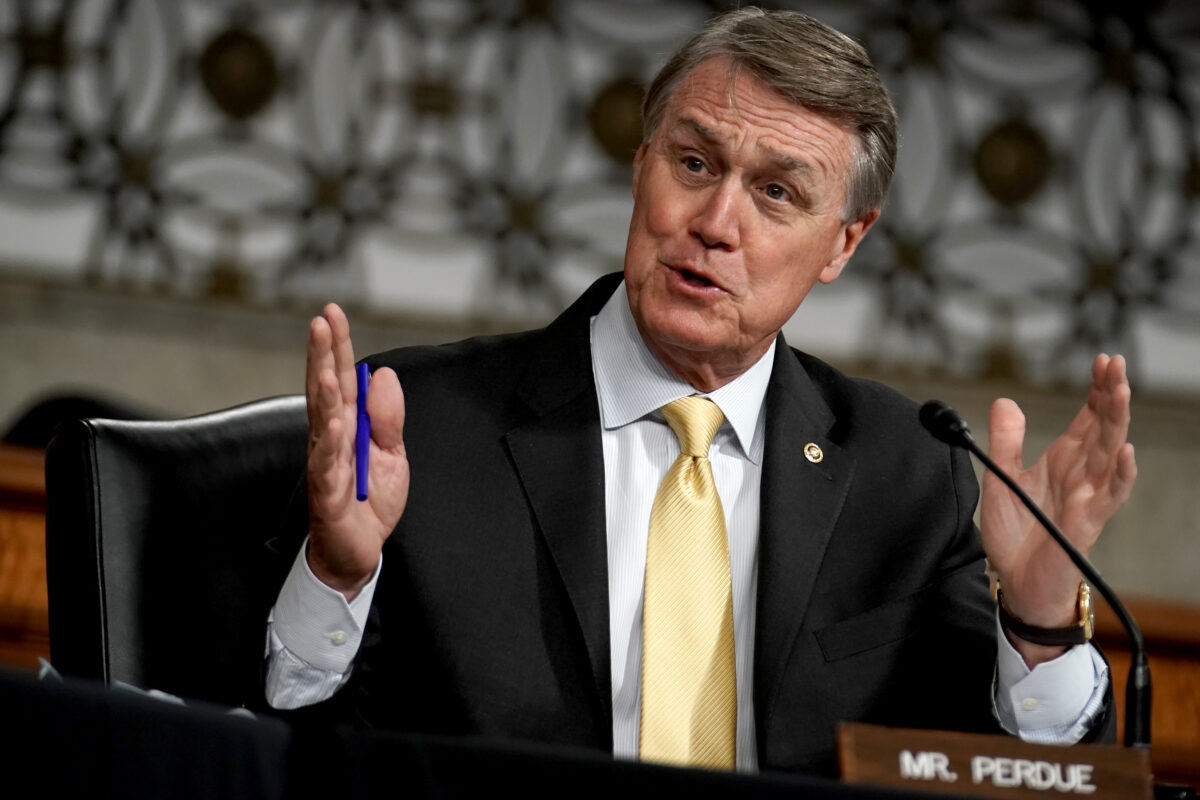 Georgia Senator David Perdue spoke at a Trump rally in Macon, Georgia last night, where he mocked vice presidential candidate and fellow senator Kamala Harris. Perdue pretended not to know how to pronounce Harris’s first name, saying “Ka-MA-la, KA-ma-la, Kamala-mala-mala. I don’t know, whatever,” as the crowd laughed along with him. Perdue’s racist, dismissive insult was all too familiar to countless Americans who spent their school years getting made fun of for having an ethnic name.

Senator Perdue never would have done this to a male colleague.

Or a white colleague.

Perdue is currently in a heated race to defend his senate seat against democratic challenger Jon Ossoff. Ossoff called out Perdue’s behavior as both sexist and racist on Twitter. He also shamed Perdue for parroting Trump’s cruelty and grossness in an appearance on MSNBC’s The ReidOut, where he told Joy Ann Reid, “This kind of vile, race-baiting trash talk is what President Trump has unleashed from sitting Republican members of the Senate.”

Ossoff was backed up by Rev. Raphael Warnock, who is running his own Georgia senate campaign to unseat republican Sen. Kelly Loeffler. Both Warnock and Ossoff are slightly ahead in two of the most contentious senate races in the country.

Politicians like David Perdue and Kelly Loeffler seek only to divide us up on racial and political lines. @ossoff and I aren't going to let them. https://t.co/vHNrXlidbw

Perdue’s campaign claimed that the senator “simply mispronounced Senator Harris’s name, and he didn’t mean anything by it.” But it’s not as if he doesn’t know how to pronounce her name. After all, they both serve on the same senate committee. But this is hardly new territory for Perdue, who ran anti-Semitic Facebook ads against Ossoff and Chuck Schumer earlier this year. Ben Fry, Perdue’s campaign manager, took down the ad, calling it “an unfortunate and inadvertent error.”

Perdue’s racist tangent is a craven plea to Trump’s deplorable base. In mispronouncing Harris’s name, he is insinuating that Harris, the first Black and South Asian woman to be the vice presidential nominee of a major party, is somehow “less American”. It’s sexism and racism wrapped in a MAGA bow and delivered by a politician who knows he can’t win on his party’s losing platform.

Many took to social media to call out Perdue’s blatant racism:

Perdue and Kamala Harris have served in the Senate together for that long. The disrespect is intentional. https://t.co/P5HFL2JWs8

By deliberately botching the name of his fellow U.S. senator, Sen. Perdue is communicating that Kamala Harris’s name is different and so is she – a black woman who is not like us and is underserving of our respect. It is his reprehensible conduct that is undeserving of respect. https://t.co/1PwNCFdhVL

.@sendavidperdue serves on a senate committee with @KamalaHarris. He knows damned well how to pronounce her name. This cheap pandering at yesterday’s @realDonaldTrump rally has created a backlash against Perdue. And it should!https://t.co/TiPZY0pXlf

Well that is incredibly racist.

Vote him out and vote for @ossoff https://t.co/XTLRXSJNem

Remember: Sen. Perdue has served with Sen. Harris since January 2017 – more than 3.5 years. After more than 1,300 days as colleagues in a chamber of 100 people, he either has no idea how to pronounce her name, which I doubt, or he would rather just mock it for being different. https://t.co/jIakHkW302

Perdue. Perdoo. Per doo doo. Peri Peri sauce. Whatever. These ethnic names are just too difficult for us real Americans.

Every kid with an ethnic name knows what it's like to be teased because of their name. But we expect better of a U.S. senator.

Even Perdue Chicken, a company with zero affiliation with the senator, is facing blowback from angry customers:

It's been a busy morning for the good people at @PerdueChicken pic.twitter.com/dNANe7mtKe

There has been an unexpected upside to Perdue’s gross comments. Ossoff’s campaign reported that they had already raised $1 million in campaign funds since Perdue’s racist attack.

Folks! We’ve raised $1M (!) since my opponent disgraced himself with bigoted mockery of Kamala’s name at yesterday’s Trump rally.