"That cannot happen again. We cannot allow it." 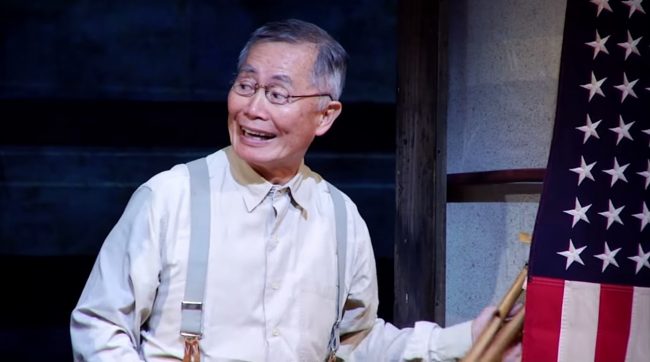 In an essay for Washington Post titled, “They interned my family. Don’t let them do it to Muslims,” Star Trek‘s George Takei writes about his family’s time in the Japanese interment camps and asks, have we learned nothing from history?

Carl Higbie, former spokesman for Great America PAC, brought up internment in a recent interview on Fox News when referring to Kris Kobach’s suggestion that Trump’s administration could reinstate a national registry for immigrants from Muslim countries. Higbie stated, “We’ve done it based on race, we’ve done it based on religions, we’ve done it based on region. We’ve done it with Iran back–back a while ago. We did it during World War II with Japanese.” When Megyn Kelly pushed him further, Higbie denied he was proposing internment, but added “I’m just saying there is precedent for it” in his support for a registry.

Takei asks that we consider the implications of these words, and how “Higbie speaks of the internment in the abstract, as a ‘precedent’ or a policy, ignoring the true human tragedy that occurred.” These words and references to a registry, for many Japanese-Americans, have opened old wounds. I’m reminded of a moment in Renee Tajima-Peña’s My America…or Honk if You Love Buddha (which I very much recommend) where Tajima-Peña recounts an incident where her teacher denies her family was interned because “that kind of thing could never happen in America” and another where she’s told by a white man that interment wasn’t a bad thing.

Takei also points out that when addressing internment in late 2015, Trump went on the record to say he “would have had to be there at the time to give you a proper answer.” Notably, there were headlines at the same time shortly after the Paris attacks about interning refugees coming to the United States. California representative Mark Takano re-shared his tweet from then, reemphasizing the should-be-obvious fact that internment is not a model policy.

This history isn’t only absent from many schools, it’s also constantly misrepresented as an unfortunate necessity. Let’s be frank: internment was violence and discrimination disguised as security that ruined lives, killed people, and caused almost irreparable damage even afterwards to the Japanese-American community. It happened. It happened under the Democratic administration of Franklin D. Roosevelt, and we can’t assume it won’t happen again if we don’t recognize and learn from this dark period in history. Takei writes:

Let us all be clear: “National security” must never again be permitted to justify wholesale denial of constitutional rights and protections. If it is freedom and our way of life that we fight for, our first obligation is to ensure that our own government adheres to those principles. Without that, we are no better than our enemies.

He also went on Twitter to promote the theatre run of Allegiance, the musical about Japanese interment that I wrote about here. Members of the Trump administration would do well to participate and watch.

To not repeat the mistakes of the past we must first learn about it. Join us nationwide in a 1-day event #NeverAgainhttps://t.co/ux5n5LpnQc

You can and should read Takei’s full essay here.

(via Boing Boing, Image via Allegiance screencap)
Want more stories like this? Become a subscriber and support the site!