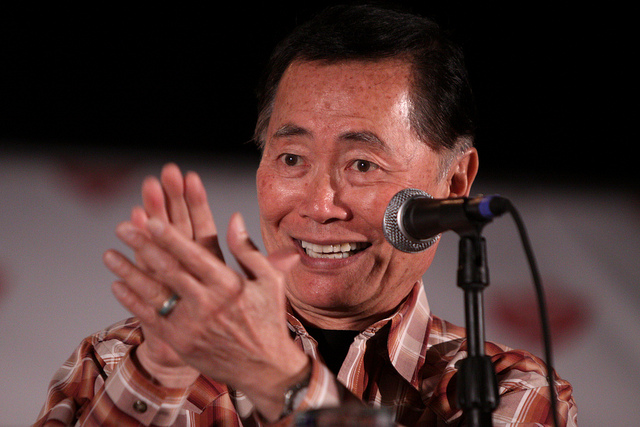 IDW will publish an as-yet-untitled graphic novel about Takei’s life, “particularly his time as a 5-year-old when he and his family were sent to live in government internment camps during World War II,” next year. The book will be scripted by Justin Eisinger and Steven Scott. No word yet on the artist or colorist.

In a statement, Takei said, “I have spoken publicly on numerous occasions during my life on the unjust internment of Japanese Americans in my ongoing mission of spreading awareness of this disgraceful chapter of American history. I do this, and will continue to do so, in the hope that my personal experience can serve as a cautionary reminder of our past leaders’ mistakes, and that as a society, we can learn from those transgressions and not repeat them.”

Takei previously produced Allegiance, a Broadway musical about Japanese internment based on his own experiences. For the upcoming graphic novel, however, he emphasized that medium’s value in communicating with young readers. “When the opportunity to tell my story in the form of a graphic novel presented itself, I recognized the value in making it easily accessible for our youth to discover and digest the material,” he said, “bringing attention to an important and relevant issue, while preserving it for generations to come. We live in uncertain times, and if stories such as mine can inspire us to do better and encourage positive change, I want to share it with as many people as possible, no matter who they are, or where they come from.”

This year marks the 75th anniversary of FDR’s executive order No. 9066, which authorized the internment of more than 120,000 Japanese-Americans. Takei has recently emphasized the terrifying parallels between the xenophobia and panic that led to his own internment, and the anti-immigrant, Islamophobic sentiments pushed by Trump and his allies.

“The internment happened because of three things: fear, prejudice and a failure of political leadership,” Takei wrote for CNN. “When the administration targets groups today, whether for exclusion from travel here on the basis of religion and national origin, or for deportation based on their undocumented status, I know from personal experience that these are not done, as they claim, truly in the name of national security. No, instead they are intended to strike fear into communities, to show the muscle and ‘toughness’ of a new president, and to divide the citizenry against itself…”

Given the critical and commercial success of John Lewis’ March series, which documented the civil rights movement, the graphic novel seems like a fine vehicle for Takei’s story. And given our current political climate, it couldn’t be timelier.

(Via New York Times and The Hollywood Reporter; image via Flickr/Gage Skidmore)