Get Ready to See A Whole Lot Less of George R.R. Martin… He’ll Be Spending 2017 Holed-Up With The Winds of Winter 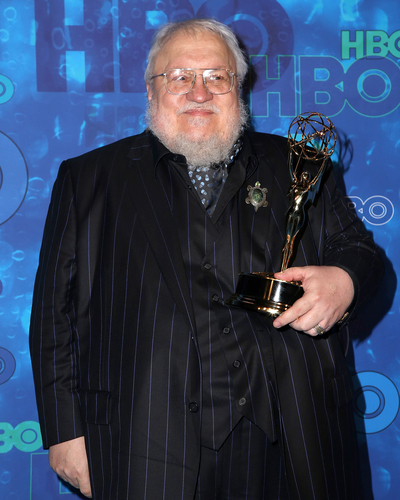 If you’re a George R.R. Martin fan, and you’ve yet to meet him and get books signed, I hope you’re at the Guadalajara International Book Fair in Mexico right now. Otherwise, you might not have a chance to see him in person again for a while. But don’t worry, it’s for a really good reason!

Over at his personal blog, which is actually Not A Blog (it’s a LiveJournal! Bless), Martin writes about his appearance and then drops this little tidbit:

This is my last scheduled event for 2016. My appearance schedule for 2017 is very limited, and will remain so until WINDS is completed. So if you want to meet me or get a book signed, this will be the last chance for a good few months…

There were likely many of you who hoped it was already done and that he was just being cagey about it, but at least now we have an idea that, while it’s not finished, this will be the major push writing-wise until he’s delivered a bouncing baby book.

Over at Winter Is Coming, they’ve posted a graphic estimating when we might safely predict to reach the end of this Song of Ice and Fire. At this pace, it’s looking like 2023:

As frustrating as any and all waits might be, quality takes time, and I’d rather stories be good than fast. Here’s wishing Martin a wonderful 2017 that allows him to get in touch with his creative flow! We’ll wait. Rocking back and forth and biting our nails incessantly, but we’ll wait.

A Song of Ice and FirebooksGeorge R.R. MartinThe Winds of Winter