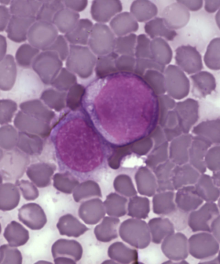 For the first time, researchers have successfully used gene therapy to treat a form of leukemia called chronic lymphoblastic leukemia. The clinical trial was only conducted in three patients, which is such a small sample size that it is far too soon to be declaring victory over cancer, but it is an encouraging breakthrough. The research is described in two papers, published in the New England Journal of Medicine and Science Translational Medicine.

People have been talking about gene therapy for more than twenty years. Though it holds immense potential, researchers have run into problems with gene therapy as a treatment. In previous research, therapeutic genes that are inserted in a specific place tended to move around for reasons that researchers have struggled to understand. The goal of gene therapy is for a gene that is inserted into a specific place to stay in that spot to serve out its function in the cell. With the new leukemia treatment, this is exactly what the researchers were able to achieve.

Led by Carl June of the University of Pennsylvania, the researchers took blood samples from three leukemia patients, and isolated the T-cells. These are a type of immune cell that recognize and attack foreign invaders in the body, but they do not normally recognize or fight back against cancer cells. In the lab, the researchers modified the T-cells by adding a gene that would signal them to recognize cells with leukemia, and attack. The cells with this gene were then injected back into the patients.

The researchers report that the cells performed exactly as they were supposed to, attacking and destroying the leukemia cells. The genetically modified T-cells were still found in the blood of the patients six months after they had been first introduced. According to the researchers, the special T-cells are likely to stick around even longer. Meaning that if the cancer comes back, the cells will still be there to fight back.

Of the three patients in the trial, two went into complete remission. One showed significant improvement, but is short of remission. All of this is achieved without the harsh regimen of chemotherapy that is commonly prescribed for cancer patients. However, there were other complications from the treatment. The type of cancer these patients had affected a type of cell in blood called a B Cell. The treatment destroyed nearly all of the patients’ B Cells, whether they were healthy or not. Also, the mass destruction of the cancer cells, fantastic as it was, also caused a problem for the patients’ kidneys. Kidneys are like giant filters in the body, and when the parts of the destroyed cells flooded the patients’ bodies the kidneys were overwhelmed, and one of the patients had to be hospitalized.

It also remains a mystery why the modified T-cells persisted in the patient’s bodies, when so many other attempts at gene therapy have failed to stick, so to speak. However, researchers around the country intend to find out. Similar approaches to cancer treatment are being studied by institutions like Baylor College of Medicine, MD Anderson Cancer Center, City of Hope, Memorial Sloan-Kettering Cancer Center, and the National Cancer Institute.

Cancer patients and their families have been waiting for a cure for decades, through the hardships of winning and losing the fight against a disease that touches everyone in some way. This research bolsters the hope that the potential of gene therapy is close to being unlocked. There are some drawbacks, and considerations that researchers will need to keep in mind when moving forward with a larger clinical trial, but they are moving forward, and that is progress.