A is for Awesome job, Mr. Guberman! 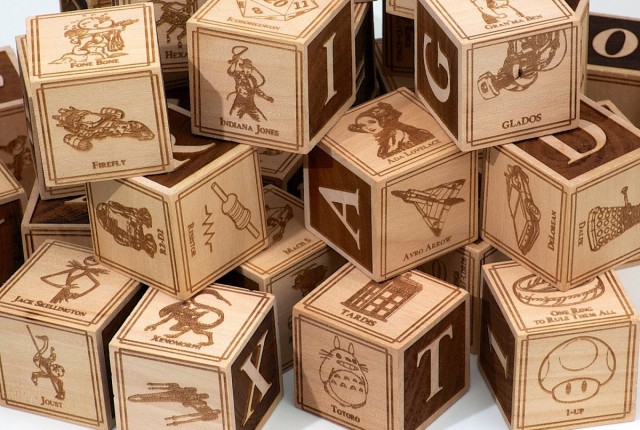 Geek-parenting is incredibly relevant to our interests here at Geekosystem (well, my interests anyway) but you don’t have to have a kid to appreciate these laser-cut alphabet blocks that feature some of the best things about geek culture. T is for TARDIS, and don’t you forget it. Take a look at all the blocks and the guy who made them. Allons-y!

These blocks were a project by artist Jonathan Guberman, who we’ve featured before on Geekosystem. Twice actually. He began creating the blocks for his son before he was born, but production went on hold after the kid was born, because infants take up all your time and keep you from doing stuff like this. (Know that feel, bro.)

It took a little longer than expected, but by the look of the photos, we’d say well worth the wait — and the effort. Turns out laser-cutting 36 blocks (that’s 26 for letters, 10 for numbers) is a difficult and time-consuming process. Each block has six sides, and Guberman designed each side. That’s 216 images.

Take a look at the blocks and what each one includes in these photos by Guberman:

Guberman outlines the entire process on his site Up, Not North, but in short, he bought pre-cut wooden cubes, and used a laser-engraver to burn the images into the wood. The blocks weren’t perfectly uniform, so he couldn’t simply stack them next to each other and print one big image. This took careful planning and a lot of effort.

The result is beautiful, and should be the envy of geek parents everywhere. We lack the facilities to replicate these blocks in wood, but a papercraft version sounds like something just about anyone could pull off with a little time and some scissors.

(via Jonathan Guberman, images used with permission from Mr. Guberman)