Geek Elders Speak: In Our Own Voices Beautifully Shows That Women Always Had a Voice in Fandom 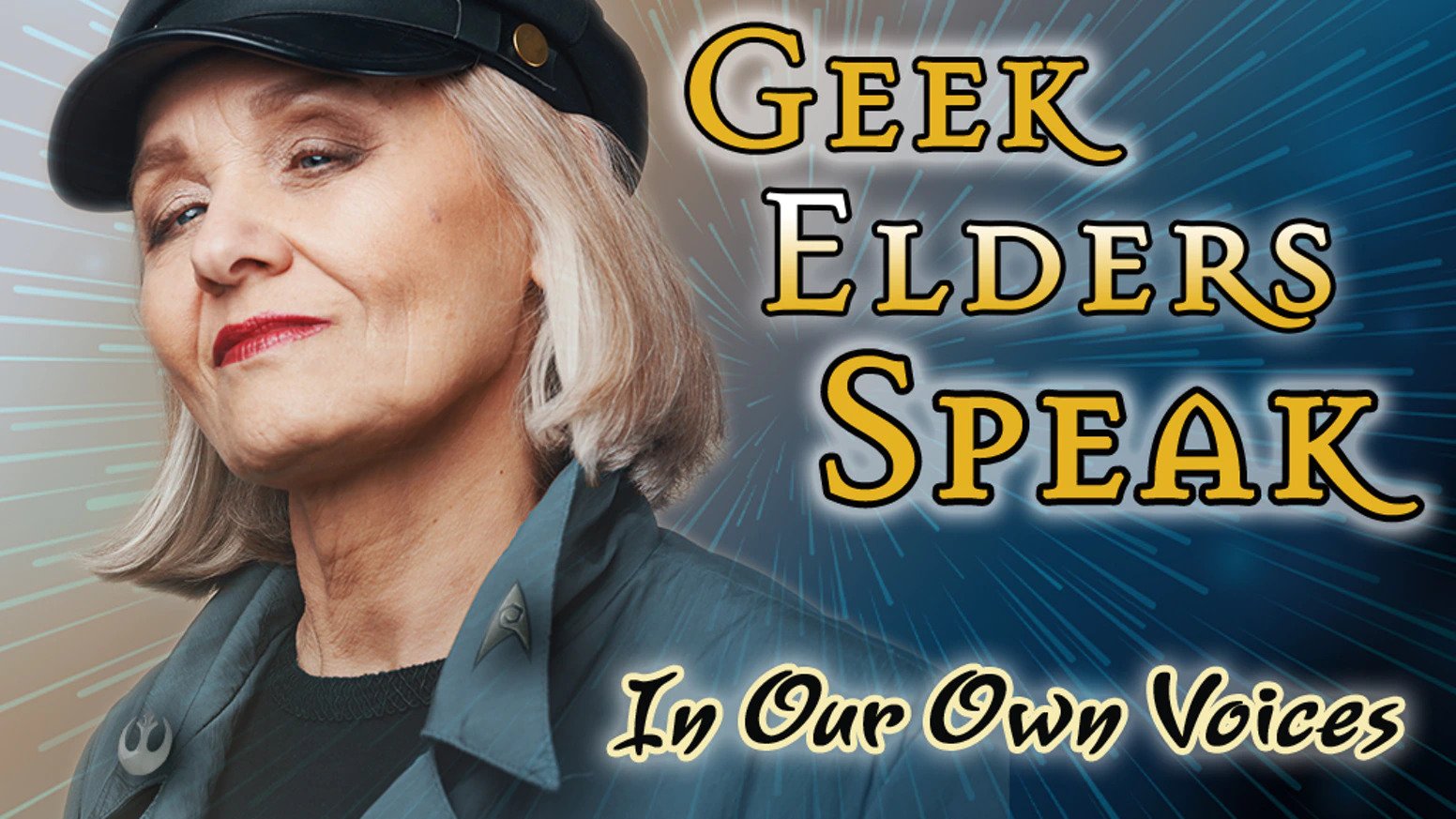 As fandom reaches a new apex in mainstream pop culture, it can be hard to believe there was a time when being a fan was considered “weird,” “dorky,” or—of course—”geeky.”

Following the season 1 finale of WandaVision and the almost rabid anticipation for the next slate of Marvel Cinematic Universe media (not to mention the multitude of other general sci-fi/fantasy franchises due to debut within the next few years), it goes without saying that it seems that fandom is here to stay—and not only that, but to be celebrated.

But it wasn’t always that way.

During the ’60s, ’70s, ’80s and ’90s, fandom, or “fannishness” was considered a niche community, with participants connecting through snail mail, small gatherings, and the very first structures of what we would now recognize as conventions and comic cons. For women especially, navigating the community often felt like being an “other” in an already “othered” space, which, as you can imagine, was frustrating beyond belief.

Regardless, in the opening pages of Geek Elders Speak: In Our Own Voices, Maggie Nowakowska & Jenni Hennig describe fandom as an empowering catalyst to “create community with others like themselves, and break out of their mid-century cocoons” and as a tool that “gave them the boost and confidence they needed to take a chance and become…self-respecting women instead of just protected daughters and wives.”

A powerful statement, but one that becomes ever more clear the more you dive into this anthology. Curated by fandom “elders” Jenni and Maggie, Geek Elders Speak: In Our Own Voices, is a compendium of personal essays and experiences by the foremothers of fandom, women who entered the community of science fiction and fantasy during a time when women were heavily policed in nearly every facet of their lives.

Contrary to popular belief, a lot of what we now enjoy in fandom is due to the contributions of the fangirls that came before us. Fanfiction is one of the most visible effects of women’s participation in fandom; building off familiar canon like Star Wars, Star Trek, and Lord of The Rings, women back in the early days of fandom used these mediums to explore themselves, their sexuality, and their artistic talents.

It was also a beautiful way to build a community of like-minded people who shared the same love of sci-fi/fantasy. What would then become LiveJournal, Ao3, Fanfiction.net, and Tumblr started off as fanzines, snail mail, and small in-person meetups. What we now know as cosplay started off as “costuming” during fan-held gatherings, clubs, and TV/Film premieres.

In many of the essays in this anthology, women also describe fandom as a way to realize the dreams that were, during that time, barred to them because of their gender. For example, in Rosalie Blazej’s essay, “Explorations and Questions,” she opens the piece by declaring that she “wanted to be a scientist.”

Unfortunately, during that time it was not seen as possible for women, as they were encouraged to be “office workers” or “telephone operators,” nurses or teachers—and that’s if they finished high school and came from a “comfortable middle class family.” Upon discovering Star Trek and science-fiction, Rosalie was able to fulfill her yearnings through Star Trek’s expansive theme of “asking questions and exploring ideas.” Through fanzines, fanfiction, and connecting with other like-minded women, Rosalie was able to empower herself in a way she never thought she had access to.

And as I read through the anthology, I found so many similar threads connecting the greater collective story these women were telling. Fandom wasn’t only a fun pastime or hobby, let alone a “geeky” or “weird” niche; it was a powerful avenue for many women to empower themselves in their personal autonomy, and the greater cultural lens in which they were interacting with.

Rather than submitting to the “boys only” club gatekeeping, many women found themselves the freedom to fully explore self-expression, sexuality, careers, and art that not only engaged with them, but was made for them and by them.

And today, how many ways can we see the echoes of this movement present in the fandom we know now? Between powerful female character/female-driven stories, strong and ever-present communities like Ao3 and Wattpad, and the massive behemoth that is cosplay and comic cons, women have been able to center themselves at the forefront and continue to explore themselves in ways that inspire, rather than restrict—that empower, rather than diminish.

And perhaps that may be why fandom itself has become so mainstream in this day and age. After all, inspiration is contagious, and many today are discovering the ways they can live their truth through the media they consume. And that, to me, is a very beautiful thing.

As a female Blerd (Black nerd), I often find myself navigating many of the same issues the Geek Elders themselves grappled with, albeit from a lens that carries the very different weight and intersection of gender and race.

And there are many others whose experiences with fandoms have allowed them to engage with and discover their own identities: LGBTQ+ fans are experiencing their own cultural discovery through the efforts being taken to provide true inclusivity and representation. And the same goes for non-Black PoC fans, differently-abled fans, and so many more.

It makes me wonder the stories we will find ourselves telling when we reach the ages that the fangirls of Geek Elders Speak have reached. And more so, it makes me so excited to see the ways that fandom continues to grow and change each of us—and pop culture as a whole—for the better.