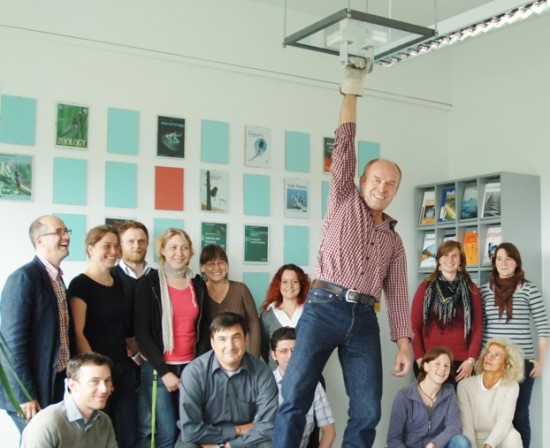 As you may be aware, geckos are really, really good at sticking to stuff. What’s more, they do it naturally without any sort of traditionally sticky substance involved.  You know, the kind of annoying sticky substances involved with most man-made things that are made (by men) to stick things to other things. Of course, there’s a lot to be gained from harnessing the power of the gecko: Robots that can climb walls, removable wall and ceiling fixtures, and of course, non-sticky tape that can support the weight of a full grown man. With that last one in mind, a group of scientists from the University of Kiel, led by Stanislav Gorb, appear to be living the dream.

The way gecko-adhesion works is through the use of Van der Waals force. This is the same force that holds droplets of condensation to an ice-cold can of crisp, delicious brand name soda or charmingly refreshing brand name beer.  Normally, as I’m sure you can imagine, this force is not very strong. Those drops can’t get too big before, well, dropping. Gecko feet overcome this issue of quality with good old-fashioned quantity. Geckos have these little hair things called setae on their feet that have little spatulas at the end. They have thousands of these things, all of which use Van der Waals force, ultimately giving them crazy adhesion.

Okay, well why hadn’t anyone done this before? Not for lack of trying, that’s for sure. The fact of the matter is that while the concept is easy enough to grasp, actually making the tiny setae artificially has proven, in the past anyways, to be extremely difficult. The varieties that actually worked tended to be less effective than the geniuine article, requiring absurdbly smooth surfaces or providing sub-par strength.

Now, Gorb’s team has managed to produce a variety that is effective. Really effective. Effective enough that a 8 inch by 8 inch piece can support the weight of a full-grown man. To boot, because it’s Van der Waals powered, there’s no sticky stickiness and the tape can be used over and over and over and over again. No word on exactly how easy it was to produce, but as with all tech, things get cheaper over time, so hopefully this’ll be consumer-grade tech someday soon because I want to be Gecko-man.