Gamers Get Less Competitive As They Get Older 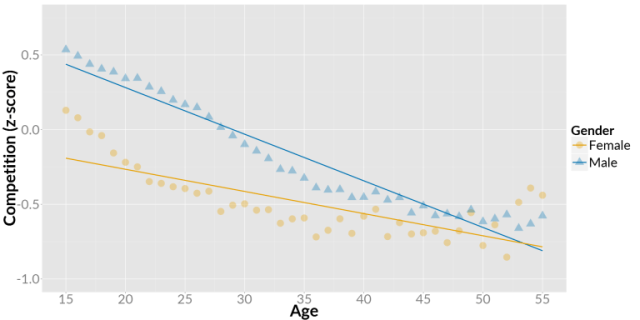 According to new research by Nick Yee of Quantic Foundry, age is a better indicator of a gamer’s competitive spirit than gender. As reflected in Yee’s graph above, which reflects survey responses from over 140,000 gamers, the competitive spirits wanes more quickly for men than it does for women. Yee writes,

As gamers get older, the appeal of Competition declines, but this happens more rapidly for men than for women. Thus, by the time we’re past 45, the difference between men and women largely disappears.

There’s another interesting take-away here. The biggest gap between men and women (among younger gamers) is smaller than the difference between the youngest and oldest men in our data. So age in fact explains a bigger portion of the variance in Competition than gender does.

The framework provided to the survey respondents described competition as “the appeal of competing with other players in duels, matches, or team-vs-team scenarios.” As gamers age, Yee also found that they became less likely to describe any gaming pursuit in particular as “extremely important/enjoyable,” and scores for “excitement” as a motivating factor for gaming also tended to go down.

What’s most interesting to me, though, is the data point spread for women in the Competition graph above. You’ll notice that they start out relatively close to their male peers at the beginning, then almost immediately start dropping after their teen years and stay at roughly the same level of interest from their 20s to their 40s. Then, in their early 50s, the data points for women uptick slightly — to a point where they technically surpass their male counterparts in terms of competitive interest.

T.L. Taylor, MIT professor and longtime games studies researcher, pointed out this interesting trend in the data to Nick Yee on Twitter. He had some thoughts to share with her about that:

@ybika What’s interesting is that at age 15, the gender gap isn’t that big either. That 15-20 range for women “breaks” the regression line.

@ybika Could be an actual motivation change, but it does make you wonder if it’s young women gamers conforming to market expectations.

@ybika We have much bigger samples sizes for <50 data. So there’s more variance at >50 due to smaller sample.

I often see gamers argue that competitive interest is inherently gendered as masculine — and that’s an assumption that I’ve pushed back against for a long time, because it never made much sense to me based on my own experiences. (The argument that competition is somehow biologically motivated doesn’t really hold up on scientific scrutiny anyway — plus it’s an unnecessarily gender-essentialist way of approaching the issue.) It’s kind of neat to see a study that lines up so closely with my own experiences in life; my late teens were around when other people in my life starting telling me that it was “weird” for me to be so interested in competitive video games, that it wasn’t “attractive” for a girl to be aggressively competitive, and so on. Similar attitudes happen when it comes to women participating in competitive sports; it’s considered cool to do that when you’re younger, but after puberty, it’s been my experience that girls get socialized pretty heavily to tone down that behavior as much as possible.

I don’t know whether the uptick in competitive interest after age 50 is statistically significant in the scope of this particular study. However, I would totally believe that women might get less and less concerned about gendered expectations as they get older. The fact that society seems to stop caring about women entirely after they pass a certain age means that there’s less pressure to perform a specific role, right? I don’t know whether that would actually factor in to video game interest, but it does seem like a topic worth exploring.

Regardless, I’m really looking forward to aging into a worldly crone who keeps up with Street Fighter.

(via Eurogamer, image via Quantic Foundry)