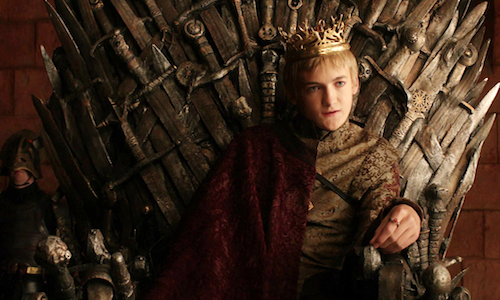 Welcome to our Game of Thrones recap from a viewer who hasn’t read the books. Enjoy the love and snark.

Everyone feels the pointy end this week, and for once I don’t mean that euphemistically: not a sex scene to be had in GoT number 8. Although it’s not for lack of trying on the Dothrakian part. But: the points are all literal, except for the main thrust — which is that things are coming to a head. (Enough talking about Rep. Weiner, I know!)

While Inigo Montoya and Arya train in the sun room, unknown soldiers storm King’s Landing, slicing and dicing the locals. Sansa is complaining about some things as usual until the Septa senses something strange (alliteration!) and tells Sansa to hide. She’s quite a bold little Septa, squaring off against the intruders and and presumably meeting her death.

Arya apparently expects her enemies to tell her which way they are attacking her from, because she is mad at Inigo for lying to her about which way he was feinting. Soldiers arrive and tell Arya to come with them. Inigo is rightfully suspicious, and quickly dispatches a few of them with a wooden sword. Arya escapes, and I regret only now naming her teacher Inigo Montaya right before his death.

Sansa is captured by the Hound. Arya stabs a young boy on her way out of KL, always getting her practice in.

Varys comes to see Ned, who is (for once!) suspicious. He sighs, “No one ever trusts a eunuch.” Ned castigates him for not defending his household, and Varys’s face demonstrates considerable amusement as he tells Ned he’s not a hero. I’m liking Varys more and more. “What madness was it that led you to tell the queen what you knew?” Now I really am a Varys fan.

In the North of Winter is Already Here, the Hufflepuffs have brought a few dead bodies in. Everyone takes turns smelling them, which I guess seems like pretty fair amusement for a fortress in the middle of nowhere. Crime Scene Investigator and Resident Genius Jon Snow says they should burn them, but Samwise convinces them to hold off so they can examine the bodies.

In the Lair of the Beastess, Cersei is playing Sansa like a finely tuned violin. She’s like the Blair Waldorf of Westeros, with a number of well-timed smiles and frowns that communicate exactly what she’s feeling at any given time. Sansa is convinced to write Robb (Ed. note: Robb) and tell him to hold his forces.

In the North of Convenient Amnesia, a literally tw0-minute scene takes place where Robb decides to declare war on the Lannisters. Blink and you’ll wonder why everyone’s camped out in Army, Mother, two scenes later. Robb declares war, Theon reminds me of Ron Weasley, and some ravens leave Winterfell. Is this a Tower of London thing?

In the Eyrie of Uncomfortable Consanguinity, Lysa is batting off a hungry twenty-year-old from her bosom and a furious Catelyn from her back. Cat’s mad to have been kept out of the loop on her husband’s arrest and son’s war path, and I’m kind of with her on that. She tries to convince Lysa to fight with them, but Lysa needs all the Knights of the Vale to protect her son’s right to suckle, so she refuses.

Tyrion is out walking with his new buddy, and he talks at him a whole bunch to convince him to protect him. Then, when their camp is invaded by Hill People, he talks at them a whole bunch until they are exhausted from listening and agree to go with him to Tywin’s camp.

If there’s any theme to this episode, it’s this line from an old dude at the Fortress: “Blood will tell.” All the Starks act exactly like Starks in their own dimwitted ways, and Jon attacks the old dude. He gets confined to his quarters, where his deus ex machina — sorry, Direwolf — barks and whines incessantly (relax, foley artist) to let him know there are zombies afoot. There are zombies afoot! One attacks the Commander, and Jon, never having seen a zombie movie, does not attack the brain nor remove the head, but simply douses it with fire. That’ll do, pig.

War is a tough game, as Dany’s finding out across the sea. Her army’s +10 Stamina and +5 Horse Jerky have conquered some local sheep-loving people (sure) and now they’re taking the spoils of war. Dany, instead of having a tantrum and slamming her door like a normal 16-year-old, commands Jorah (over the wrong shoulder) to save all the women in the village from rape at the hands of the Dothraki. It’s worth it to note that in the book, so I hear, the Dothraki had already commenced Operation Rape All the Women by the time Dany put a stop to things. I find it interesting the showrunners put her rape into the show only to take the large-scale rape out. To me, it almost hints of a recognition on Dany’s part that what happened to her was rape and that if she can, she’ll prevent it happening to others. It gives her subservience to Khal Drogo more of the manipulative tint I picked up a few episodes ago.

Anyway, one of the Dothraki takes their blue balls all the way to the Powers that Be, complaining to Drogo himself. Drogo seems very perplexed when Dany suggests the men marry the women instead of raping them. It’s like someone’s suggested he ride a mule instead of a stallion. He tries to explain things to Dany, but then explains her stubborness away by saying it’s his fierce son working inside her. Khal Drogo, Super Science Guy. (Of note: the word in Dothraki for “sex” and “rape” is the same one.)

Unfortunately, Blue Balls isn’t having any of the biology lecture and wants to mutiny. He nicks Drogo, who responds by ripping the guy’s tongue out with his bare hands. Okay. The local elder’s wife or whatever (don’t email me) heals his wound. What I find most fascinating about this scene is that Jason Momoa actually convinced the writers to put it in, to show the viewers what a Warrior Stallion this dude is.

In the NoCA (Are we there yet? Can we do acronyms?), Robb’s Direwolf launches himself at some subordinate and tears a few fingers off, which actually endears the guy to Robb. Like I said, entertainment in Westeros is slim.

Robb is leaving to infiltrate King’s Landing as a spy who came from the cold. He says goodbye to Bran, then peaces. All of a sudden, a random child appears! It is the Pointless Stark, who I will now name the Bonus Jonas. I don’t foresee him being in a ton more scenes this season, though.

In the last episode, I realized I’d been predisposed to like the wild woman they captured. That is because it is the same actress who plays Nymphadora Tonks in the Harry Potter movies, and I love her. She meets Bran at another god shrine, and I fear this is about to become Battlestar Galactica in the arena of mentions of pointless religious lore. This shrine’s face looks like >:(, by the way.

Is it just me, or does Catelyn pronounce the extra b in Robb’s name when she goes to see him? They have a nice reunion, although she makes sure to tell him everyone will die if he fucks up. I think she and Tywin would get along splendidly. I love this now-fingerless old guy, who is going around camp promising to shove swords up people’s dungholes.

Tyrion gets to his dad’s camp (why does his dad live in a tent, by the way?) and brings his new mountain friends over for a playdate. He tries to get his dad to serve them the bagel bites and nachos Tyrion promised them, but Tywin recruits them all instead, giving up his son as assurance on his debt. Like I said, this one and Catelyn, match made in heaven. One thing to take away from this scene is that Tyrion thinks he is hotter than Jamie, and to that I say, let’s not go too far, here. Then I remember we haven’t seen Jamie all episode and grow sad.

In the War Room, where there is no fighting, the Starks are discussing battle logistics (it’s about as interesting as a treasury scene) when a Lannister scout is found. Robb has taken an immersive lesson from his father in rank stupidity, and sets the scout free with knowledge of how many men strong they are, and their location. All right, then. Fingerless Dunghole Shover (possibly my best name yet) is not happy.

I get a little worked up during this next scene back at King’s Landing, where Cersei sees fit to retire Ser Bannistan before his time (i.e., death — he’s like a Supreme Court Justice in that way). Bannistan literally doesn’t know what to do with himself, what with Joffrey and Carcetti mocking him. He almost goes out fighting, but then throws his sword down and storms out. My shriveled heart stirs a little for the sweet man. And then it stirs a lot as Sansa goes to her knees in front of Joffrey (no, not like that) and begs for mercy for her father. She pleads her case in a wavering but brave voice, and of all the Starkiness that goes on this episode, hers is the most efficient. Joffrey will grant Ned mercy, as long as he confesses to his crime.

I don’t know about you guys, but I’m sensing some laborious “BUT IT IS MY NAME I CANNOT HAVE ANOTHER IN MY LIFE” John Proctor shenanigans coming from Ned in the next episode. Ned’s…not a confessor, I can wager.

Certainly, the show is at its level best when it’s getting the action done. The appearance of the supernatural at last and the Drogo fight scene was an example of this. However, they continue to do the violence in these little spurts and bursts, never having the stamina of even, say, Ros, in order to keep continuous action going. I assume with winter (war) coming, they will have a few extended battle scenes, and I will be interested in how they put their budget to work on that.

See you in this space next week!