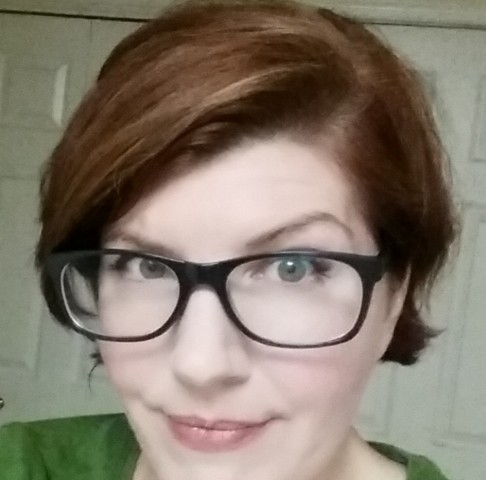 Welcome to our new series, Game Changer! Because it’s important to signal boost the work of women in the games industry (especially lately), we’ll be interviewing the awesome, brave, and talented women who bring their voices to indie and mainstream game development.

This week, we sat down with Anna Megill (@cynixy), who has worked for companies like Ubisoft, Airtight Games/Square Enix, Hasbro, Nintendo, and ArenaNet!

Emma Fissenden (TMS): Can you tell me a bit about your journey? How did you end up where you are today? What prompted your entry into the gaming industry?

Anna Megill: I was a bartender for many years and had a wild time, but didn’t see a future there. I wasn’t qualified for anything else, though. Then one day I was playing a video game with terrible dialogue, and I thought, “I could write better crap than this.” A light bulb flickered on in my mind. “I really could write better crap!” I’d never thought of games as more than a fun hobby, but it seemed like something I could bear doing every day for the next forty years. So I went back to school.

I studied English literature and computer science at (very) traditional colleges and got my first break as a QA tester on Playboy: The Mansion. I worked my way through school with various QA gigs. By graduation, I was QA Lead at Pileated Pictures (now Happy Giant Games). From there, I worked my way up through the ranks to become a writer and narrative designer. Over the years, I’ve worked for Nintendo, ArenaNet, Airtight Games/Square Enix, and Ubisoft, among others. And now I’m making games based on my own original stories.

TMS: Can you describe what your current role is? What does an average day consist of for you? How does it differ from when you’re working at a AAA studio like Ubi?

Megill: No meetings, that’s the difference! I spent a lot of time in meetings when I worked at major studios. But not anymore. Currently, I’m the creative director of a new game project for Brianna Wu’s company, Giant Spacekat. The project is in pre-pre-production right now—if that’s even a thing. That means we’re assessing the project needs, estimating budget and timeline, and [hiring] a team.

At a triple-A company, all those logistics and details would be handled by various departments. HR would hire staff. Production would determine dependencies and set milestones. And so on. And then there would be meetings galore to coordinate. But with my smaller project, everybody helps with everything. We touch base every now and then to make sure we’re on track, but mostly we trust each other to get necessary tasks done.

My average day is spent writing, looking through resumes and portfolios, and trying to work out a realistic timeline for the project. I also spend hours reading and playing games as, uh, research. The life of a game dev is hard.

TMS: What are your plans for the future? (if you can talk about any!) I know you’ve recently been given the go ahead to make your own games, which must be absolutely thrilling and a bit terrifying. Does this change the way you’re approaching work?

Megill: You’re absolutely right; making games based on my stories and my characters is terrifying and thrilling. As I mentioned earlier, a lot of what I’m doing these days is logistical. But once we get those details out of the way, I can start on the fun stuff: world-building, character bios, and plotting. After that, I’ll sit down and write the full script.

So the work is no different than on triple-A projects. It’s the same creative process, but I have fewer external constraints on my ideas now. One of our first steps will be reaching out to people and forming a player base while the games are still in production. I can’t reveal too much, but the players, as a community, will have some say in how the stories unfold. They’ll directly affect the plot. I get excited thinking about the narrative possibilities.

TMS: Do you have any advice for people—especially women—who might be considering a career in games? What’s one thing you wished the younger you would have known?

Megill: The games industry has been a rough place recently. Some tremendously talented people have left our industry because of harassment. I don’t blame them, but I’ll miss their voices. I’d advise young people to enter the industry with their eyes open. Yes, there’s harassment and ugliness, but the industry is also full of creative, brilliant, passionate people. We all share a love of games. Don’t let bullies stop you from being part of that. You’ll make new worlds and fill those worlds with creatures as strange as your imagination can make them. There’s no better feeling than seeing fans enjoy a story that was born from your brain. Don’t let fear stop you from experiencing that.

I’d advise the younger Anna to network more. I didn’t understand the value of interacting with people on social media like Twitter until a few years ago. There are jobs and opportunities that you will never learn about if you’re not well connected. I’d also tell Younger Me to stop wearing so much swag. Stop it, Anna.

TMS: Can you talk about anything really difficult you’ve had to overcome both as a writer and as a woman in the games industry?

Megill: When someone has a problem with me as a woman, it usually affects my career, too. At one company, I was sexually harassed by my lead. When I rejected him, he started sabotaging my chances at the company: ignoring me, giving credit for my work to other people, etc. I saw what was happening and went to HR. (He was eventually fired.) But if I hadn’t caught on to what he was doing, my career would have stalled, and I wouldn’t have known why.

Problems aren’t always as obvious as textbook-case sexual harassment. Gender affects my job in small ways, too. For example, I often have to defend a professional opinion that’s being challenged because of my gender. Once, I objected to a character being portrayed in an overly sexy way and was told that I’m “too sensitive” about the issue because I’m a woman. In reality, the character’s depiction contradicted the way she was written. That’s bad design, and I objected to it professionally, as a writer. But it was easy to dismiss my concerns as “prudish”because women are frequently—and often unfairly—labelled that way in the games industry. For the record, I’m all for sexy characters. With parity and appropriateness, of course.

TMS: You’ve mentioned the draw of Ubisoft was their work in presenting diverse characters, specifically Adewale and Aveline—it’s sometimes difficult for AAA studios and projects to better represent minorities. Is this something you’re actively looking to tackle in the future in your own games?

Megill: Absolutely. One of my goals when I entered the games industry was to create better games for women. The more writing I’ve done for triple-A games, the more I’ve hungered to explore all underrepresented—or misrepresented—points of view. Games like Papo y Yo, Never Alone, dys4ia, and Sunset are important steps toward getting those voices heard in the industry. But I can’t imagine any major studio making those games.

My games will be full of women, POC, and people of all genders and sexualities. I want the characters in my games to reflect the richness and diversity I see all around me in real life. I want the protagonists of my games to be people who never get to see themselves represented as heroes. And I want those people to find a welcoming game community where their suggestions and contributions are valued.

Megill: GW2, hands-down. The energy on the project was amazing. ArenaNet made sincere efforts to innovate, and you could feel it in the dev process. All ideas were welcome. Creativity was encouraged. Everyone on the project was invested in their work, and we knew our game was good. It was a fulfilling experience as a creator.

Megill: It’s not just from this year, but Kentucky Route Zero continues to delight me. It’s like playable melancholy. I love Hohokum. Spiritually, it’s the exact opposite of KRZ0. And maybe A Bird Story? If you ask me next week, it might be Never Alone.

TMS: Of all time?

Megill: Asking the hard questions. Great. The first two are easy: Psychonauts and Journey. But the third… How can I choose? The Myst games, maybe? Ico? Pinball? Katamari Damacy? The Last of Us? Or Little Big Planet. No way can I decide.

TMS: Most frustrating sequence you’ve played in a game?

Megill: There were some jumping puzzles in the early Tomb Raider games that almost made me ragequit [gaming]. But the toughest obstacle I’ve encountered in any game was the fire marble dome puzzle in Riven. I spent two months trying to solve that thing, but finally had to give up and cheat. It defeated me.

Megill: Me! No, hear me out. I love it when games give me the freedom to fully inhabit my avatar and react to what happens in the game world naturally, through emergent gameplay. Journey is a great example of that.

TMS: Favourite character of yours from a game you worked on and why?

Megill: Well, of the characters I’m free to discuss, there’s Uptown Johnny. He’s a minor baddie in GW2’s early human story. Johnny’s a sleazy, rude, womanizing bandit. He’s over-the-top cocky and obnoxious to everybody in the game. You know his type from real life: a grade-A jerk. When you get to kill him later in the story, it’s immensely satisfying. I’d always overkill him, with fire and poison and minions, then sit back and enjoy his convulsions. ArenaNet cut almost all of his lines for various reasons, so all that’s left now is a faint bat-squeak of the original offensive character. But Johnny taught me how important it is to hate villains viscerally. Players shouldn’t want him dead because intellectually or objectively he’s a bad guy. They should want villains dead because you, the writer, have made players despise them from their guts out.

Megill: Peekaboo, probably. But the first video games that hooked me were the Myst games.

Megill: I lived in Seattle for years, so if I don’t say “coffee,” a team of lumberjack ninjas will visit me in the dead of night to grind my bones into beans. So… yeah. Coffee.

Emma Fissenden is a writer of all trades. When she’s not pushing through her next rewrite, she’s playing too many games and editing fiction at @noblegasqrtly