We Are Not Impressed With Game Companies’ Apparel Options for Women 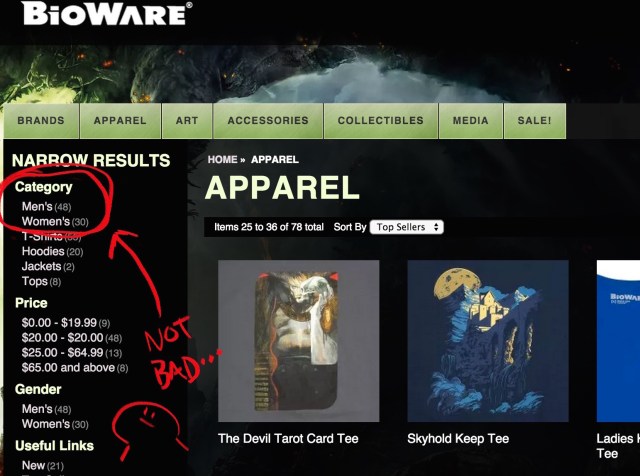 It all started when I was searching for another Mass Effect-related piece of merchandise to add to my ever-growing collection of all things Bioware. After typing the Bioware store’s website into my browser, I was greeted with categories for either men’s or women’s apparel—it didn’t occur to me until recently that there was more clothing for men than there was for women. That revelation might not be a surprise to some, but I was genuinely shocked.

The Bioware store boasts 48 pieces of clothing for men while there are only 30 for women. Although that didn’t seem like a big deal, I was curious to see if this was a trend among stores that were directly affiliated with game developers.

Next up I went to the PlayStation store to browse apparel from various games ranging from The Last of Us to Bloodborne. I figured that since the PlayStation store sold merchandise from different game franchises, there would be more clothing for women. Despite the 11 games the store had merchandise for, and 62 of them being pieces of apparel, only 13 of them were labeled for women while the 47 of them were for men. That’s even less than Bioware, which only had Dragon Age and Mass Effect in their inventory. It was a little discouraging to see the limited options I had in terms of what I could throw my money at. Even so, I pressed on. 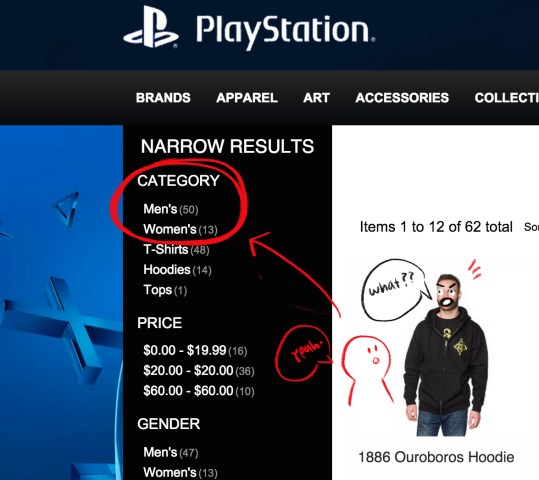 The next store I searched for was Bethesda. With 9 games under their belt and categories for apparel like t-shirts and hoodies, I went in with high hopes and came out just as disappointed. There were 12 pieces of clothing for women and 61 for men. Even though I had only checked three stores, the women’s-to-men’s ratio in terms of clothing was jarring and deterred me from checking other websites. 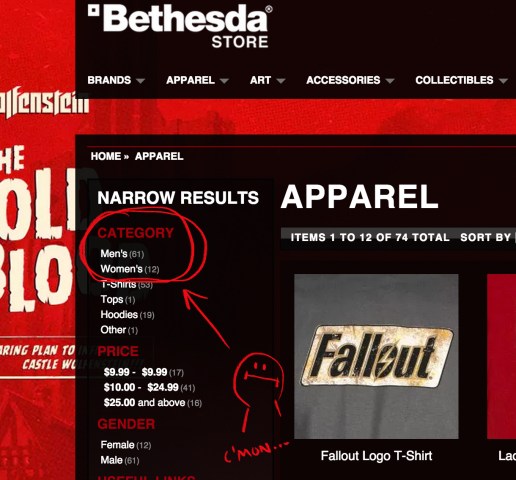 In the ladies department, there are a handful of t-shirts/tank tops/hoodies that share the same design that’s featured in the men’s section. The upside is that they’re both the same price, but the downside is that there are more options for men. There are more designs available in a size that was manufactured to fit the average man.

I’m well aware that I could just buy a small sized shirt from the men’s category and be done with it or go to a website like WeLoveFine or HerUniverse, but that’s beside the point. Stores that are directly affiliated with developers/companies offer less merchandise for women. That reinforces the assumption that women don’t play video games or wouldn’t be interested in purchasing products related to their games. As a female gamer who wants all of the video game related things, I find it mildly insulting.

I don’t think the companies I mentioned above meant to do this intentionally, but this trend of not recognizing the entire audience that is the female gaming community serves to emphasize the belief that we don’t exist. We do! I promise you that I’d love nothing more than to take my wallet and chuck it at you if it meant more merchandise for me. I’m sure the rest of us would appreciate it too.

But what can we do about it? Starting an email campaign sounds like a simple enough way to make get our message across, but who would actually be listening? Requesting assistance directly through the stores’ “contact us” links only takes me to a page that is vaguely reminiscent of a form I’d see in the doctor’s office, and I’m not sure that would go anywhere other than a form-letter response.

In my opinion, the more we talk about it, the more of a chance we have. Let’s start a conversation! Where’s all the merchandise for women, and how can we band together to make our voices heard and get more of it?

Emma Kidwell is a self-proclaimed freelance writer who is usually seen holding a controller. When she’s not busy writing about all things gaming, you can find her avoiding impending adulthood responsibilities or dodging questions like “what do you want to do after you graduate?” If you want more, you can find her ramblings at Femhype and SpliceToday. Or you can find her on Twitter.