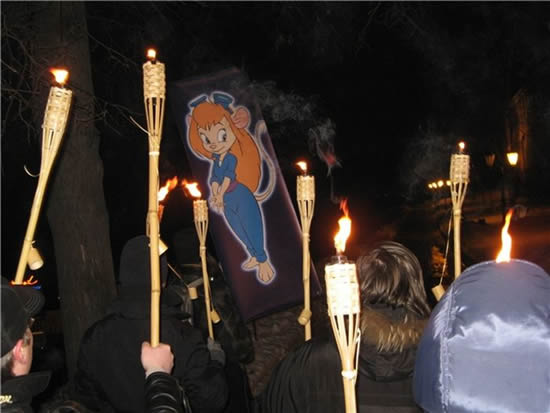 Yes, apparently their love for Gadget burns with such unbridled passion, a group of people in Russia have built an entire religion around her likeness. They pray to posters of Gadget, write songs about her, and places stickers of her anywhere they can. But really, we’ll let their (dubiously translated) words speak for themselves:

But out of everything I’ve seen from this story, this comment from Tranceaddicted on English Russia pretty much sums it all up:

Her beauty, intelligence, kindness, mixed with fix-it-girl image is so tempting. Her pics from the cartoon are wonderful, but there’re so much fanart where she looks just the ideal female. I look on her and think: what would i like to be changed in her? and understand- nothing. She’s perfect. In our dirty world She’s the only angel. I downloaded lots of her pictures within some days and keep looking and looking on her, just can’t take my eyes off. I absolutely understand the men who started the cult, because Gadget gives all us the hope that there’s the endless beauty in our world. The ideal girl. Which we’ll never meet in reality.
I love you, Gadget.

Sure, it’s understandable why some people might be attracted to the type of woman who could build a functional grappling hook out of nothing but materials accessible to a woodland rodent. And yes, Gadget is the type of female cartoon character that, when Googled with Safe Search off, will return several images that will force you to revisit a number of your childhood memories in a much more inappropriate context. But outright worship of her — that’s a little weird, even by Internet standards. 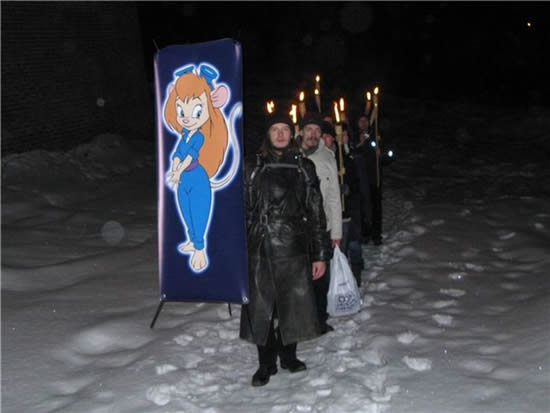 “In Soviet Russia, this happened!”

Perhaps, in time, we’ll uncover more about the origin of these pictures. Perhaps it’s not a full-grown religious movement, but a themed party for somebody who really, really liked Rescue Rangers. But still, it can’t be healthy to have such a strong devotion to a character from a TV show that stopped production 20 years ago. Now, if they were to form a cult around Leela instead, that would be a different story entirely.

(pictures and story via Topless Robot.)