I don’t doubt that at some point during their lives both Maggie Simpson and Edna Krabapple could publish research in a respected journal (I know Edna’s already submitted to Soup for 1; Wine For 3). But Fuzzy, Homogeneous Configurations is not that study. In fact, it’s not even a study at all.

Instead, the excellently-named paper is the work of engineer Alex Smolyanitsky, who devised the research as a way of exposing predatory scientific journals: “I wanted first and foremost to come up with something that gives out the fake immediately […] My only regret is that the second author isn’t Ralph Wiggum.”

After being contacted by the Aperito Journal of NanoScience Technology and the Journal of Computational Intelligence and Electronic Systems, Smolyanitsky told Vox that he used a random text generator to compile the paper and devised a fake University name for Maggie and Edna’s affiliation. One of the journals accepted the paper immediately, while the other—likely in an effort to simulate the peer review process—waited a month before publishing, and has repeatedly sent Smolyanitsky an invoice since for $459.

To be clear, the paper is immediately suspect even to the non-scientific reader, and not just because of the authors. It’s all garbage.  Beautiful, spam-tastic garbage: “We removed a 8-petabyte tape drive from our peer-to-peer cluster to prove provably “fuzzy” symmetries’s influence on the work of Japanese mad scientist Karthik Lakshminarayanan.” The abstract is, literally, abstract: 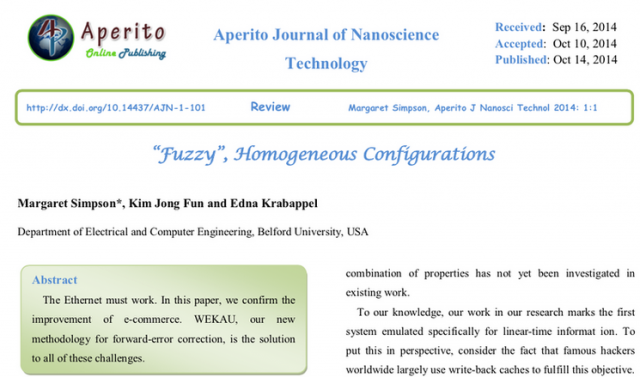 Predatory journals like those exposed by Smolyanitsky take advantage of legitimate scientists (no offense, Maggie and Edna) and in some cases have famously allowed unreliable research to gain dangerous traction. If you’re up for feeling a little exasperated, Vox has an in-depth look at the history of  these outlets and the intentionally ridiculous papers that have exposed them (Get Me Off Your Fucking Mailing List is especially notable).

Me, I’ll be over here having wine for three and working on plans for my new Alanis cover band. The Fuzzy, Homogeneous Configuration Ethernet are going to melt your eardrums.